Congratulations to recent Writing grad Kayla Czaga for winning The Malahat Review 2012 Far Horizons Award for Poetry. Her poem, “gertrude stein loves a girl”, was selected as the winner out of 509 entries by judge Mary Dalton. The now Vancouver-based Czaga picks up $,1000 and her winning poem will appear in the Malahat’s Winter 2012 issue. 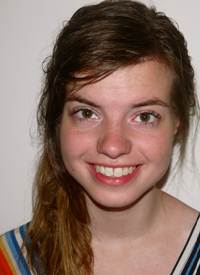 As noted on the Malahat website, Dalton—a Canadian poet and professor in Memorial University’s English department—says of Czaga’s poem: “The pleasures of ‘gertrude stein loves a girl’ are multiple. Drawing on the syntactical disruptions and linguistic play of modernist Stein, evoking a whole world in its small compass, this set of five short pieces riffs astutely on the concept of girlhood: the light and the dark. Playful, sprightly, shifting among tones of exuberance, irony, and sorrow, the poem fuses subject and form . . . . It creates a sense of irrepressible energy, even as the lineation suggests restriction.” (Click on over to the Malahat for Dalton’s full comments.)

Czaga won the “Best Bad Haiku Contest” in her second-year poetry workshop back in 2008, and graduated from UVic in 2011. Her poems “Biography of my Father,” and “Proposal for the Palace of Soviets (1933)” both won Editor’s Choice awards in ARC Poetry Magazine’s 2012 Poem of the Year Contest. She’ll begin her MFA at UBC in September 2012.

Keep your eyes open for an interview with Czaga on The Malahat Review website in September.