Student reflections: A Series of Nudges

He told me about a violin teacher his daughter had had when she was growing up. The teacher hardly ever spoke, or directed; she simply supported his daughter’s arm, repositioned her bow hold . . . I asked if that was teaching; he asked what teaching is supposed to be.

a series of nudges

I dedicated the past year of my life to studying and learning “De Profundis”: a piece for speaking pianist by Frédéric Rzewski, with text by Oscar Wilde. (Wilde was incarcerated from 25 May 1895 to 18 May 1897; he was charged with ‘indecency’ on account of his homosexuality, then condemned in Britain. From January to March 1897, Wilde wrote a 50,000-word letter to his former lover, Lord Alfred Douglas, from his cell in Reading Gaol).

A behemoth of a piece, the technical, conceptual, philosophical, and performative demands on the interpreter are many. The opportunity to work one-on-one with professors in piano, sculpture, voice/writing, and philosophy, was fundamental to any success had in the development of this project.

The opportunity to focus absolutely on one project and to delve into such detail at the undergraduate level is rare, and the understanding gained from such tailored support is inimitable. In a directed study, the professor is able to challenge you: “what do you give attention to, and why?”

“I made art a philosophy, and philosophy an art… I treated Art as the supreme reality and life as a mere mode of fiction.” (Wilde)

UVic provides exceptional artistic training, perhaps mostly because of the staff and faculty’s commitment to training, and supporting critical thinking, above all else.

the need to ask a question

“no one’s ever done that before”

With the exception of the time I wanted to hang – in a harness, suspended from the ceiling – for the duration of a performance, these are words I never heard spoken to me during my five years at UVic. Every challenge was met with openness and flexibility from all levels of the School of Music, and I would even venture to say from the entire Faculty of Fine Arts.

In my second year, I wanted to write and produce a 12-minute opera; my professor helped me book the hall and supervise rehearsals, while others helped construct a projection screen and stand, develop choreography/staging, and put together a performance in under two weeks.

In third year, I proposed the idea of doing my graduating composition outside, on top of Mt. Tolmie. In fourth year, my supervisors asked me what I needed and helped put me in contact with Indigenous elders, language specialists, and students with relevant experience. 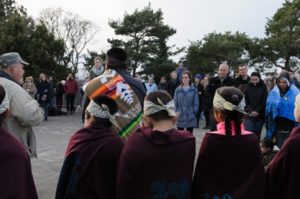 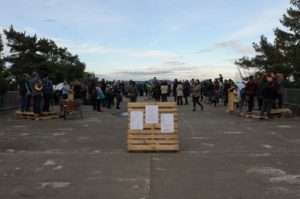 They assisted me in a multitude of administrative tasks, including securing third-party liability insurance, booking rehearsal venues, and renting a port-a-potty!! 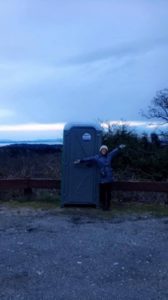 In fifth year I wanted to do the “De Profundis” project as a sort of transition from ‘undergrad’ to ‘professional’ world, and I was fully supported in my endeavours to host this project off-campus. The school generously provided many resources and lessons even at the satellite location, once again going above and beyond regular university standards. 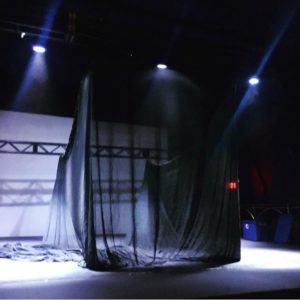 Rebekah Johnson from Blue Bridge Repertory Theatre helped put together this mock-up in the months leading up to “De Profundis,” so I would have the opportunity to experiment with different lights, GOBOs, colour gels, etc. This was organized through the help of my sculpture prof, Daniel Laskarin.

I wonder if a university is a place to learn skills, or ideas.
(I think probably ideally both.)

…and the ability to pursue those ideas,

(a nudge is not a direction)

There is no question that I, my way of thinking, and my way of making art have all changed drastically since I came to UVic five years ago.

Is learning the same as listening?

I wonder if a university is a place to meet new ideas, or new people.
(I wonder if there’s a difference.)