Shannan Calcutt is serious about her clowning

For most people, Las Vegas is a place of escape and relaxation. But for celebrated Department of Theatre alumna Shannan Calcutt, what happens in Vegas keeps her in Vegas. 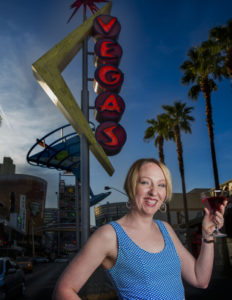 And while it’s Shannan Calcutt who got the job, it’s her famed alter-ego clown Izzy who has entertained over half-a-million Cirque spectators in Zumanity. “My partner and I are the comedians in the show, and we change what we do every night based on what the audience says and does. That keeps it fresh.”

While Calcutt had mask and movement training at UVic, she didn’t formally study clowning until after graduation, when she attended California’s acclaimed Dell’Arte International School of Physical Theatre on the advice of then-Theatre professor John Krich. It was there Calcutt met master teacher Sue Morrison, which resulted in her studying with noted Calgary physical theatre company The Green Fools; and it was there, during a Morrison-led workshop in Clown & Bouffon, that Izzy first emerged with what became her signature line. “We were doing duos at a cabaret in front of an audience and I asked my clown partner, ‘Do you think I’m pretty?’ That’s really where Izzy was born.”

It didn’t take long for Calcutt to make a name for herself with the Izzy trilogy—Burnt Tongue, It’s Me, Only Better! and Out of My Skin—winning multiple awards and playing to sold-out audiences across North America and as far afield as the Sidney Opera House. She was scouted by Cirque du Soleil as early as 2000 (“I was put forward for Varekai and Corteo”), but it wasn’t until 2005 she joined Zumanity. Not that she’s been resting on Izzy’s laurels since then. “I just finished a Master of Fine Arts in Writing for Dramatic Media with the University of Nevada, Las Vegas,” she says. “I spent a lot of time in the dressing room writing papers.”

In addition to the Krich, Calcutt also notes Theatre professors Linda Hardy and now-retired Julianna Saxton as key influences, but names the late legendary professor Kaz Piesowocki as being singularly important. “As the movement coach, Kaz was a huge influence on me . . . he made such an impact on us all—the way he taught impulse, physicality, the breath—it was all so simple, but resonates in everything I’ve done since.” 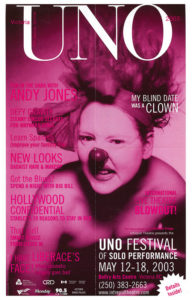 It’s been 13 years since Izzy last performed in Victoria

This kind of dynamic learning is what makes UVic’s Theatre department different from other Canadian universities, notes department chair Dr. Allana Lindgren. “In addition to our ‘hands on’ approach to education, we offer a comprehensive program that equally values practical and more traditionally academic courses,” she says. “These factors mean that our students leave our undergraduate and graduate programs with numerous options . . . it also doesn’t hurt that we also have one of the best educational theatre facilities in the country.”

While it’s been nearly 20 years since she graduated, the 40-year-old Calcutt is philosophical about aging alongside her character. “As you get older, so does your clown, so Izzy has really grown up here in Vegas,” she explains. “In Burnt Tongue, Izzy is very innocent—it’s her first show, she’s all about finding a guy—but now she’s one of the sex experts in Zumanity. Izzy has a husband in the show—played by my clown partner, Nicky Dewhurst—but my ‘real life’ husband Darren Pitura is our back-up, so I do work with him on occasion too. Darren and I have had two kids, so my body isn’t 25 anymore . . . that’s the beauty of being a clown—instead of having the shame of not looking like you used to, you shamelessly celebrate it instead.”

Best advice she was ever given? “Make your own show; don’t wait to be cast. Look at the alumni coming back [for this festival] — Charles Ross or TJ Dawe or myself—we’ve all created our own vehicles to perform. Don’t wait for someone to decide that you’re good enough, or smart enough, or talented enough. Talent is great, but you’ll never have more than you do today; you can work on skills and training, but it’s motivation and drive that will get you where you want to go.”