A short story turned short film turned out to be the shortest route to the Cannes International Film Festival for Fine Arts staff member and UVic alumnus Dan Hogg. A digital media technician who specializes in film production, Hogg was invited to Cannes in May when his 10-minute film, Floodplain, was included in Telefilm Canada’s annual Not Short on Talent showcase. 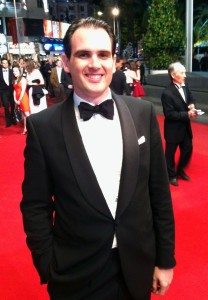 Dan Hogg on one of the many red carpets in Cannes

“The screening was great, people seemed to really respond to the film, and nobody walked out . . . which was good,” says Hogg, calling from Cannes. “The festival’s pretty incredible—it’s the largest film market in the world, with over 5,000 films represented.”

Floodplain is the latest collaboration between Hogg and Department of Writing alumnus Jeremy Lutter, who directed the film; they were also co-producers on the project. The bittersweet story of two childhood sweethearts voyaging across a Kootenay lake on a homemade raft, Hogg wrote the Floodplain screenplay from a short story by fellow Writing alum and rising literary star D.W. Wilson—and all three UVic grads travelled to Cannes for the screening, along with Chris Orchard, who did visual effects for Floodplain.

“Cannes is one big hustle,” says Hogg. “There was well over a thousand films in the short film corner and there’s maybe eight serious buyers of short films in the world.” But while Hogg says he didn’t have “an ulterior motive beyond enjoying the festival and figuring out what it’s all about,” he did meet producers, film fest programmers and attended a film-pitching workshop. 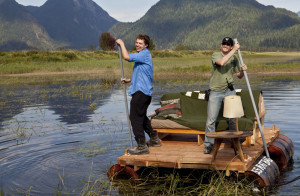 “When you’re there, you can talk to people you wouldn’t otherwise get to meet. A lot of countries are represented and have pavilions, and they all have networking events, happy hours, lectures, panels and workshops, press and industry events . . . there’s a lot going on.” Floodplain was promoted at the fest by the Canada Pavilion and Telefilm Canada’s own pavilion.

No stranger to either film festivals or awards, Hogg—who received his BFA from UVic and also graduated from the UCLA Professional Program—was part of the team that created the Leo Award-winning UVic web series Freshman’s Wharf in 2010. Not that he stopped there, however; in 2012 alone, Hogg also received the National Screen Institute Drama Prize, a second Leo nomination (for his own short film Woodrow Without Evelyn), was named a finalist in the Praxis Screenplay competition, earned two production grants, and is currently writing the feature film Rip My Heart Out (which he describes as “a tongue-in-cheek creature feature”) as part of the NSI/Movie Central Script to Screen initiative. 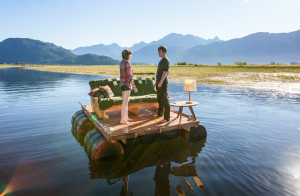 Beyond seeing the obligatory stars on the red carpet (“Robert Redford, Leonardo DiCaprio, Matt Damon, Michael Douglas, Zachary Quinto, Tobey Maguire . . . the list goes on,” chuckles Hogg), the filmmakers are now looking to the future. They have a broadcast and webcast deal in place with Bravo television, are shooting a Floodplain-related music video for Victoria band Jets Overhead—which will be the third Jets video for Lutter, and Hogg’s second—and are now submitting Floodplain to festivals. 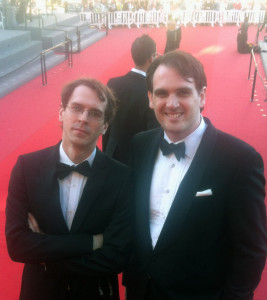 Once You Break A Knuckle author D.W. Wilson & Hogg puttin’ on the ritz in Cannes

“Our festival window is just over a year,” says Hogg. ““Some festivals have ‘premiere status’—Toronto, for example, has to be a North American premiere, whereas Victoria simply needs to be a regional premiere.” And the timing for festivals can be persnickety: if you apply to TIFF as a premiere, for example, then you can’t go in any other festival first. “It’s a little tricky. If TIFF were to be our North American premiere, we then only have an eight-month festival window due to our broadcast deal with Bravo.”

And is a feature-length version of Floodplain in the cards? “That would be one hope, especially with the world D.W. has created,” says Hogg. “These characters have a pretty solid narrative arc throughout their lives in his short-story collection Once You Break A Knuckle, from the first time they met to about 15 years after this story is set.”