It was big news last year when internationally acclaimed School of Music professor Dániel Péter Biró was named the recipient of a Guggenheim Fellowship — one of North America’s most prestigious awards. Biró’s intention was to use the one-year award (worth $50,000 US) to reflect on one of the most important issues of today: global migration. Now, audiences in select North American cities will have the opportunity of hearing the results when his large-scale musical composition Ethica is performed this month. 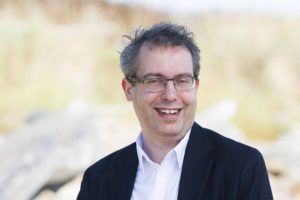 Based on Baruch Spinoza’s philosophical work of the same name, Ethica will debut at the Americas Society/Council for America in New York City on May 4, as performed by Schola Heidelberg and the ensemble aisthesis, featuring pianist Donald Berman and conductor Walter Nussbaum. Kirk McNally, the School of Music’s assistant professor of Music Technology, will also be collaborating in the performance of electroacoustic pieces in this concert.

Following the New York debut, Ethica will also have live performances in Winnipeg (May 6) and Vancouver (May 10-11), as well as here in Victoria Victoria (May 8-9). Click here for a complete schedule of events.

The Victoria performance is part of the 2018 SALT New Music Festival and Symposium, and the public is welcome to attend a free lecture and performance of Ethica at 7:30pm Wednesday, May 9 at Congregation Emanu-El (1461 Blanshard Streeet). Ethica will be performed by Biró, Klangforum Heidelberg and the ensemble aisthesis; they will also perform a work by the late Czech pianist and composer Gideon Klein, written in during his internment in the Theresienstadt concentration camp during WWII.

The KlangForum Heidelberg is where two very distinctive ensembles for contemporary and ancient music come together: the voices of the Schola Heidelberg and the instrumentalists of the ensemble aesthesis. Together, they have built an international following, thrilling audiences around the world with their innovative concert formats and injecting new life into the relationship between music and society.

A taste of SALT 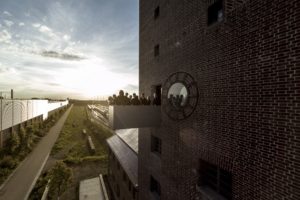 While at the SALT Festival, Klangforum Heidelberg will also be presenting a reading session for young composers and an open rehearsal of works by Canadian composers including Claude Vivier, Philippe Leroux and Örjan Sandred, who will be in attendance.

Now in its seventh year, the SALT Festival is a series that reverberates far beyond Victoria’s shores. “People actually know about Victoria through our contemporary music scene,” Biró explained in this recent article. “I was in Vienna and just met someone by chance on the street and they said, ‘Oh, you run the SALT New Music Festival’ . . . . Victoria has always been known as kind of a weird place, a place for experimentation.”

These events are happening in collaboration with the SALT New Music Festival and Symposium, Open Space, the University of Manitoba and Vancouver New Music and made possible through support from the John Simon Guggenheim Memorial Foundation, the Canada Council for the Arts, the BC Arts Council and the Goethe Institute.

Biró’s composition Ethica is inspired by the time he spent as a visiting professor in the computing and information sciences department of Netherland’s Utrecht University in 2011, where he was living not far from Spinoza’s burial site in The Hague. While one of the greatest philosophers of the 17th century, Spinoza was banned from the Portuguese Synagogue in Amsterdam because of his views — which, says Biró, proved too radical for the time. 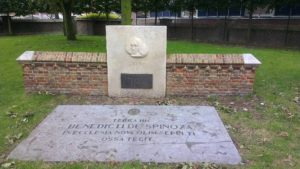 Spinoza’s burial site in The Hague

“In his philosophical treatise Ethics, Spinoza attempted to present a new type of theology, one that was autonomous from organized religion, such as that of his own Portuguese Jewish community,” he explains. “[My] composition explores historical dichotomies between religious and secular thinking from the perspective of modern-day globalized existence.”

His Ethica cycle will be scored for voices, ensemble and electronics, and will also incorporate text from Spinoza’s philosophical work.

“Exploring concepts of ‘space and place,’ the composition will deal with questions of one’s place in the global world and how music informs and influences our perception of our place in this world,” he explains. “Looking at musical creation as an analogy to the movement of the immigrant — who discovers, remembers, forgets and rediscovers places on his voyage — the composition will investigate relationships to historical space, space of immigration and disembodied space.”

During the 2016/17 academic year, Biró was an artist-in-residence with UVic’s Centre for Studies in Religion and Society; in 2015, he was made a member of the Royal Society of Canada’s College of New Scholars, Artists and Scientists, and he was awarded a Fellowship at Harvard’s Radcliffe Institute for Advanced Study in 2014; he has also received numerous other international prizes and commissions.

And, as a result of his Guggenheim Fellowship, Dániel Péter Biró was the only UVic professor —and the only arts researcher — included in the prestigious Universities Canada publication, Canadian Excellence, Global Recognition: Canada’s 2017 Winners of Major International Research Awards.