It’s been a busy fall for Department of Visual Arts professor and acclaimed photographer Vikky Alexander. In addition to her busy teaching schedule, she opened two recent photography exhibitions and now has the first of two more early 2015 shows open. 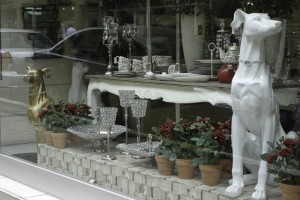 Opening January 30 is a solo exhibit of new work at Calgary’s TrépanierBaer Gallery titled The Troublesome Window. Focusing on the seductive mechanisms of display used in shop windows in Paris, Istanbul and Tokyo, Alexander’s The Troublesome Window further explores themes of consumption and seduction—a consistent theme since the early ’80s. The Troublesome Window will establish the depth of her visual investigation by combining several series of works from different periods.

As TrépanierBaer notes, “Vikky Alexander has constructed a body of critically engaging multi-media work examining the relation between nature and the fabricated “natural”. Drawing upon the varying aesthetic devices of interior and graphic design, and architecture and media, Alexander’s critique centers on the way culture uses simulation to create fictionalized versions of the perfect world. Her analysis of the artificial impulse in cultural production configures a repertoire of appropriated materials that recall modernism’s promise that technology would lead to power over nature and transcendence beyond the mundane. Alexander’s representations of the simulated natural posit an ironic stance calling attention to notions of absence that simulation typically masks.” 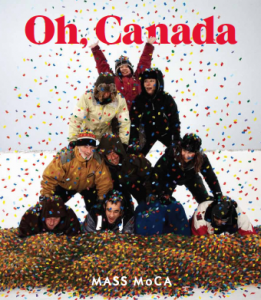 The Troublesome Window is part of the Exposure Photography Festival 2015, and presented in conjunction with the opening of the 2012/13 MASS MoCA exhibit Oh, Canada, now running February 1 to April 26 in Calgary. Huge in both scale and scope, Oh, Canada is the largest survey of contemporary Canadian art ever produced outside Canada and features more than 100 artworks by 62 artists and collectives from across the country. Too big for one gallery, the exhibition will be presented in Calgary at the Esker Foundation, the University of Calgary’s Nickle Galleries, the Alberta College of Art + Design’s Illingworth Kerr Gallery, and the Glenbow Museum.

The exhibit opens with a 6-8pm reception on Friday, January 30, 2015, at which Alexander will be in attendance. The TrépanierBaer Gallery is at 999 8th Street S.W., Calgary. 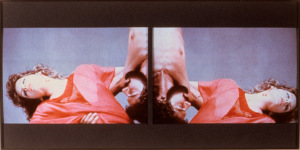 From Vikky Alexander’s “The Temptation of St Anthony”

In other Vikky Alexander news, her winter 2014 exhibit at The Apartment Gallery in Vancouver is the retrospective The Temptation of St Anthony. Appropriated from 1980s fashion photography, these pivotal historic works by Alexander are arranged as near religious diptychs and triptychs, offering classic postmodern takes on objectification and temptation.

Described by pioneering Vancouver artist and writer Ian Wallace as “an expression of the imaginary, wherein fantasies of hope and utopia are acted out in the daydreams that call reality into question . . . . Alexander’s work projects the raw indulgence that exists on the inside of these fantasies, heightening our apprehension and anxieties of them from within.” 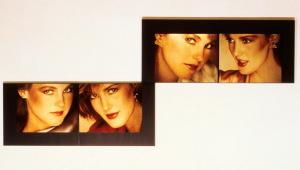 From Vikky Alexander’s “The Temptation of St Anthony”

“These are collective fantasies and are linked to popular taste for images that transcend the everyday,” says Wallace. “The images of extreme beauty, which are ubiquitous in commodity culture, function as a cult of escape from the everyday.”

The Temptation of St Anthony runs until January 24 at Vancouver’s The Apartment Gallery, 119B East Pender. The gallery is open noon-5pm Saturdays, or by appointment via email info@theapt.ca or by calling 604-336-4046.

She will also have a project in Montreal coming in February 2015. 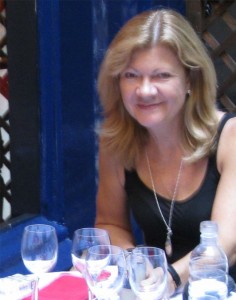 Working as a photographer, sculptor, collagist and installation artist, Vikky Alexander is a leading practitioner in the field of photo-conceptualism. Her work explores the relationship between art, architecture, and nature, and in particular the modernist tendency for incorporating landscapes into buildings and the notion of domestic utopia. She is interested in how nature is experienced in a consumer society, which she investigates in her photographs of artificial environments as well as her use of mass-produced decorator materials such as wood veneers, wallpaper murals of landscapes, and mirrors.

Alexander has long established herself as an important voice in contemporary photography, and her work is also part of the permanent collection in The National Gallery. Over the past 30 years, her solo exhibitions have been seen in Los Angeles, New York City, Bern, Vancouver, Toronto, Windsor, Ottawa and Wellington, as well as the National Gallery of Canada. And her work has been included group exhibitions at the likes of London’s Barbican Art Gallery, New York’s Whitney Museum of American Art and Dia Art Foundation, the Yokohama Civic Art Gallery, the Taipei Fine Arts Museum, and the Seattle Art Museum.

You can glean some insights into her work in this 2013 interview with Vancouver’s online Here and Elsewhere magazine. 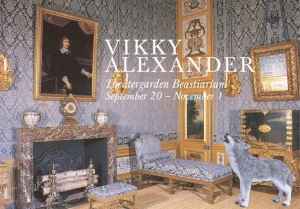 Her fall 2014 exhibit at the Wilding Cran Gallery in Los Angeles—titled Theatergarden Bestiarium—focused on a series of photo-collages featuring cutout images of animals from a toy catalogue overlaid onto a photo of a historical site, sans people. As the Huffington-Post noted in this review, “The flat-footed austerity of the collages’ artistic construction stands in diametric contrast to the opulence of each depicted site; suspended in this dialectic is a multiplicity of meanings.” 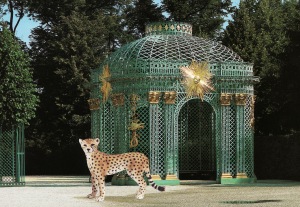 Alexander’s photos highlight the improbability of the fabricated scenes, with intentionally less-than-seamless construction of each collage—the animals, for example, cast neither shadow nor reflection. “In using source materials from toy catalogs and postcards from her own travels, Alexander invokes the persona of an eccentric preoccupied with the creation of a fantastic world analogous to Huguette Clark’s dollhouses, William Randolph Hearst’s menagerie, or the fictional character Jean des Esseintes’ idiosyncratic interiors in the 1884 novel Against Nature,” writes Annabel Osberg in the Huffington-Post. 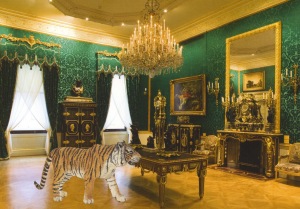 “The luxurious sensibility of Alexander’s grand interiors and gardens further reinforces such a persona. However, Alexander creates her worlds not for entertainment, but to show the dichotomy between the consumption that accompanies humans’ extreme affluence and the comparatively modest use of resources by animals, to whom wealth means little except insofar as it contributes to humans’ power over them. The more complex and affluent our societies become, the more we dominate the earth, annexing land and forcing other creatures to either adapt to artificial conditions or withdraw into ever-shrinking natural habitats.”

Osberg concludes with the thought that “Alexander’s show is a two-dimensional simulation of a zoo or museum that, rather than proffering specific instructive facts about animals or history, exhibits the spuriousness of common representations and treatments of them.”

Prior to Theatergarden Bestiarium, Alexander was one of 12 artists selected for a summer 2014 group exhibition at the Wilding Cran Gallery.