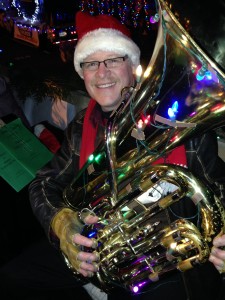 When it comes to the sounds of the holiday season, nothing says Christmas quite like a tuba. And, for 37 years now, Victoria’s Tuba Christmas Ensemble has been playing carols and raising funds for charities, becoming a cherished holiday event in the process.

Once again, the euphonious tones of massed, low-brass instruments will be heard from 1-3pm Saturday, December 12, at downtown’s Market Square (560 Johnson), and again at the annual Tuba Christmas Reprise Recital at 8pm Sunday, December 13, in UVic’s Phillip T. Young Recital Hall. Admission to both is by donation.

“TubaChristmas Victoria has raised thousands of dollars for local charities,” says event coordinator and School of Music instructor Paul Beauchesne. “Once again, this event will bring together tuba and euphonium players from all over the Pacific Northwest to band together to exchange musical ideas and enjoy each other’s company—and help the people most in need in our community.”

The Market Square concert will raise money for the Times-Colonist Christmas Fund, while monies raised from Sunday’s concert will be used to assist tuba and euphonium projects within the School of Music. 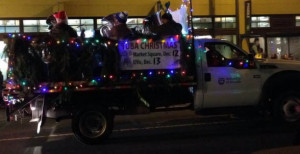 It’s already been a busy year for Beauchesne and the Tuba Christmas ensemble, a handful of whom appeared for the first time in Victoria’s Santa Light Parade on November 28, playing on the UVic float—also a first! Crowds at the parade were estimated around 40,000, and cheers of “Tubas! Tubas!” could be heard along the route. But the larger TubaChristmas ensemble will include local musicians from the School of Music, public schools, community and military bands.

No stranger to local audiences, Beauchesne is a Yamaha Canada Performing Artist, a Distinguished Alumni for the School of Music and has been Principal Tuba of the Victoria Symphony for the past 10 years; last year’s TubaChristmas event saw him stepping in to assist the late Eugene Dowling, who founded the local event in 1983. This year Beauchesne is at the helm for the first time, continuing the tradition that has become such a big part of Christmas in Victoria. The Victoria TubaChristmas ensemble has been featured on CBC radio and television, CTV News and with the Victoria Symphony Christmas Pops program. 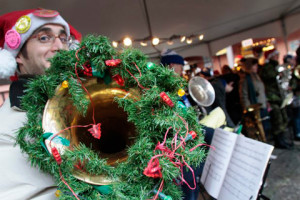 An international event, TubaChristmas was founded by the late Harvey Phillips of Indiana University back in 1974. It now takes place in over 200 cities worldwide, and honours the late William Bell (1902-1971)—Phillips’ teacher and former tubist with the New York Philharmonic—who was born on Christmas Day. From the first TubaChristmas in New York City’s Rockefeller Plaza Ice Rink, the warm, rich, organ-like sound of the tuba and euphonium choir has won the hearts of audiences time and again. It’s no wonder that TubaChristmas has established itself as a Christmas tradition in cities here and throughout the world.