Whether they realize it or not, generations of graduating UVic students have been touched by the music of Dr. Erich Schwandt.

Professor Emeritus of Musicology in the School of Music, Dr. Schwandt passed away in Victoria on August 2. A native of California, he attended Stanford University for his entire academic training, where he studied harpsichord with noted American musicologist, Putnam Aldrich. After a period of teaching at the Eastman School, Schwandt came to UVic in 1975, where he taught until he retired in 2001. 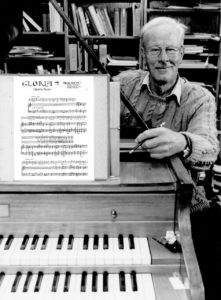 An expert on music of the French Baroque, towards the end of his career Schwandt did major work on the early 20th century composer Erik Satie, notably reconstructing his lost Messe des pauvres, which had its world premiere at UVic in 1997, accompanied by a 40-person choir.

A gentle and witty man, much beloved by his students, he continued to be a presence at the university after he retired, and for 30 years played the huge Clearihue organ at every convocation ceremony in the University Centre Farquhar Auditorium until spring 2013. His work as an organist was profiled in this “Day in the Life” story for UVic’s Ring newspaper back in 2011. “It’s a lot of fun, and it’s an easy thing to do,” Schwandt said at the time. “I get to play whatever music I please.”

Indeed, due to his position as organist, Schwandt may have attended more UVic Convocations than any other person, with tens of thousands of UVic grads hearing his work. “It means a lot to the families to see their child get their degree,” he said, adding that he had “also heard speeches of all kinds from honorary degree recipients through the years.” (Favourites included eco-forester Merv Wilkinson and Canadian author Carol Shields.)

Schwandt was also instrumental (pun intended) in UVic’s acquisition of the Clearihue organ in the late 1970s. “I saw an ad with a very vague description of an organ for sale in Quebec for $20,000,” he recalled in the Ring article. “I went to Quebec to investigate. And it was in a church where it had been subject to extreme fluctuations in temperature and had suffered damage so that it was barely playable. Local organ builder Hugo Spilker went and examined it, took it apart, arranged for transport and modified it mechanically for installation in the new UVic auditorium.”

The French classic organ — originally built by 1966 by Georges Mayer of Sarre-Union, France, for the parish of St. Mathias, Quebec — was purchased and donated to UVic by Dr. Joyce Clearihue, as a memorial to her parents Joseph and Irene Clearihue (Joseph served as UVic’s first chancellor). “I like it very much,” Schwandt said at the time.

Schwandt’s interest in education surfaced at an early age when he tutored the neighboring pastor’s child on the kitchen blackboard. His appreciation of music dates back to his early years in his childhood home, which held two pianos and an organ that he restored while in high school.

In 2015, Schwandt was awarded Honorary Alumnus status at UVic, when then-Director of Music, Dr. Susan Lewis, described him as “one of the department’s defining spirits.”

A memorial gathering for Erich Schwandt, with music and refreshments, will take place at 2 pm Saturday, September 30, at the University Centre Farquhar Auditorium. In lieu of flowers, donations can be made to the Mary M. and Erich P. Schwandt Scholarships. Donations can be made either online or by mail: Faculty of Fine Arts, University of Victoria, PO Box 1700 STN CSC, Victoria BC V8W 2Y2. Attn: Development Office. Please include in Cheque Memo: “Mary M. and Erich P. Schwandt Scholarships”

—With files by Kristy Farkas, Robie Liscomb and Samantha Krzywonos