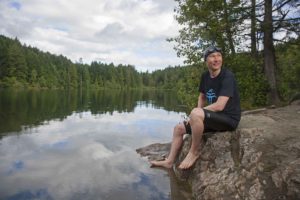 On July 8, 1917, iconic Canadian painter Tom Thomson drowned in Algonquin Park’s Canoe Lake. Now, on the 100th anniversary of Thomson’s death, intermedia artist and Visual Arts chair Paul Walde will swim the length of Canoe Lake — accompanied by a synchronized swim squad, canoe flotilla, brass band, film crew . . . and a minute of silence recorded at the bottom of the lake.

Not only will The Tom Thomson Centennial Swim allow Walde the opportunity of commemorating the centenary of Thomson’s death with this site- and temporally-specific piece, but he will also be reframing the enduring images and legacy of the early 20th-century artist for future gallery installations. 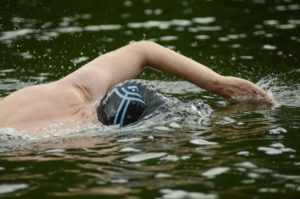 Media interest in this story has been high, with Walde being interviewed for 10 different media outlets in BC and Ontario, ranging from CBC Radio’s Up North in Sudbury to The Early Edition in Vancouver (skip to the 1:20 mark) and talking about “Canada’s Van Gogh” on radio shows in Victoria, Kamloops, Kelowna and Prince George, as well as this June 22 Times Colonist article and this Saanich News article.

But the most interesting piece was this story that ran on page A3 of the July 9 issue of the Toronto Star, where arts reporter Murray Whyte actually traveled to Canoe Lake to witness the swim itself.

“Landscape painting is about beauty,” Walde says in the piece. “But the landscape is dangerous. It doesn’t care if you live or die. That was the very limit of what I could do. For me, to be in the water where he died — that was powerful.”

Walde is well-known for his bold and innovative sound and video installations, including Requiem for a Glacier in 2013, filmed live onFarnham Glacier in BC’s Purcell Mountains and earning international headlines, and Alaska Variations for an Anchorage Museum exhibition in 2016, which was singled out by USA Today as one of the top US museum exhibits of the year and was recently exhibited in Norway. 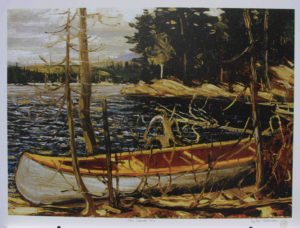 “I grew up in Northern Ontario near where the Group of Seven did their first trip together,” he says. “This is what was presented to us as Canadian art, and through my work I’ve been trying to find other ways of engaging with the landscape, especially around issues of the environment and colonialism.”

“I’m trying to give people a sense of what [the landscape] sounds like, what it looks like below the surface, to try to create . . . a different understanding,” Walde told the Times Colonist.

The Tom Thomson Centennial Swim will be documented by a professional film and audio crew. Footage from the event — including underwater body-cam, mobile boat units and stationary positions — will be combined with shots of the lake and locations featured in Thomson’s paintings. 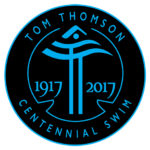 Thomson was also the subject of Walde’s 1997 theatrical performance, Index 1036, a collaborative work created with his wife Christine Walde, a UVic librarian, which fictively examined Thomson’s death in the context of contemporary performance art.

A former competitive swimmer who uses lake swimming to inform his practice as an intermedia artist, composer and curator, Walde has created a body of work exploring interconnections between landscape, identity, and technology with historical events as a recurring theme. 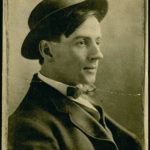 Canoe Lake, where Canadian artist Tom Thomson died in 1917, is located in Ontario’s Algonquin Park, Canada’s oldest provincial park (est. 1893) where Thomson worked as a guide from 1913 until his death.

UVic’s Visual Arts department is recognized nationally and internationally for developing innovative artistic voices and is one of Canada’s leading contemporary art programs.