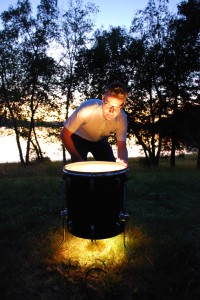 Paul Walde at work with a study for “Composition for Percussion, Light and Ultrasound”

“The Department is excited to have Paul join our ranks,” says Visual Arts chair Daniel Laskarin. “His expertise and enthusiasm will complement and augment the range of learning available to our students, and his creative work will be a welcome addition to the discourse of the visual arts at UVic and beyond.”

Walde is a multidisciplinary artist, musician and curator who has been teaching at the University of Western Ontario of late. As his website bio states, his “eclectic body of work suggests unexpected interconnections between landscape, identity, and technology and includes painting, photography, printmaking, sculpture, installation and audio.” He is also a founding member of the London-based experimental sound art collective, Audio Lodge.

A graduate of the University of Western Ontario (BFA) and New York University (MA), Walde is also the winner of The Prescott Fund Award from the National Arts Club in New York City, and has recently received awards from the Canada Council for the Arts and the Ontario Arts Council. As the Artistic Director and visual arts curator of LOLA—the London Ontario Live Arts festival—Walde has presented projects by such international artists as Brian Eno (UK), blackhole factory (DE), Yoko Ono (US), Jamie Lidell (UK), Caribou (CAN) and Paul D. Miller, aka DJ Spooky (US). Often blurring the lines between producer and curator he has also presented the work of such Canadian artists as Michael Snow, Kelly Mark, Dave Dyment, Gordon Monahan and Michelle Gay. 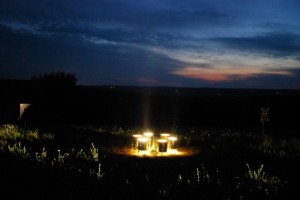 The completed “Composition for Percussion, Light and Ultrasound”

His piece, “Composition for Percussion, Light and Ultrasound”—an after-dark installation consisting of a group of drums containing high-powered lights to attract moths, plus audio mics to amplify the sound of the moths as they fly across the drum skins and react to audio recordings of bat sonar—was featured in both the spring 2011 issue of Musicworks magazine and the summer 2011 issue of Utne Reader magazine. (“I’m interested in fusing nature and culture and trying to come up with things that are interesting,” Walde is quoted as saying. “The piece looks to interpret nature however it happens in real time.”)

“The past seven years in London have been extraordinarily productive,” Walde said in a recent note to the London arts community, “and many of you have contributed to the success of my projects whether they have been the exhibitions or performances of my own art projects or those of my collaborators Audio Lodge, the LOLA festivals that I curated, the LOLA concert series which I helped organize, the publication of my writing, or contributing to the dozens of public programs that I helped organize and present at Museum London. I am also indebted to my colleagues at the University of Western Ontario where I have taught for the past seven years, with the exception of the two years I spent at Museum London. It goes without saying that I will miss London and all the wonderful friends that I have here. I thank you for your continuing support as I make this important transition in my professional career.”

Paul Walde will begin teaching at UVic in January 2012.