Crimes of the Heart offers a memorable sister act 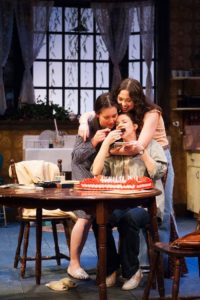 Is there anything more lovable — or more maddening — than sisters? With an unshakeable bond that can often escalate into emotional heights unmatched by any other familial relationship, sibling rivalry and reconciliations are in the spotlight in Crimes of the Heart, the latest mainstage production at Phoenix Theatre.

It’s Hazlehurst, Mississippi, circa 1974 and, after a difficult childhood, the three Magrath sisters have grown up and gone their separate ways: Meg escaped Mississippi to pursue her Hollywood dreams; Babe married an ambitious young lawyer; and Lenny remained at their Granddaddy’s side in the family home. But after Babe commits a violent crime, the three sisters reunite back home for the first time in years; utimately, each sister must come to terms with the consequences of her own crimes of the heart.

Humorous and heartfelt, this Pulitzer Prize-winning play by American playwright and screenwriter Beth Henley captures the incredible power of family. Department of Theatre professor Peter McGuire says Crimes has “been on my list for a few years.”  In this Times Colonist preview, McGuire felt this was the right time to mount this female-fronted production. “Looking around the department, and watching which actors were coming up, I knew I’d have the right cast for this play. This made sense — it has six actors and four wonderful female roles.” 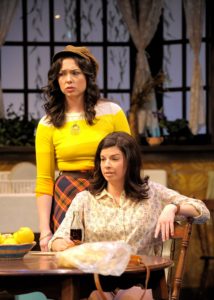 First produced in Kentucky in 1979 and again in New York City in 1980, the original Broadway production of Crimes of the Heart not only won the 1981 Pulitzer Prize but also the New York Drama Critics Circle Award for best new American play; Henley also received a Tony Award nomination for best play and, five years later, an Academy Award nomination for best adapted screenplay for the movie adaptation, which featured Jessica Lange, Diane Keaton and Sissy Spacek.

But accolades alone weren’t what attracted McGuire to the project. Even though plans to produce Crimes were in place more than a year ago — long before the #MeToo movement — McGuire feels the timing couldn’t be better. “We weren’t predicting this,” he told the Times Colonist. “But the timing is incredible. As an instructor, I’m always mindful of the fact that the gender ratio is really skewed. There are some great plays for women, but there aren’t many great plays for women.”

Phoenix’s Crimes has been receiving some nice local coverage, including the Times Colonist article and this Oak Bay News preview, as well as this review by local arts blogger Janis LaCouvee. And local entertainment monthly Monday Magazine declared Crimes “a triumph” in their review, which noted that even though it’s set in the ’70s, the show “has a fresh relevance today.” 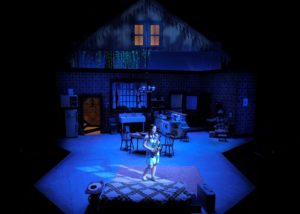 Monday‘s review went on to praise the designs by current Theatre students Stefanie Mudry (calling her set “perfect to the last detail of the period”) and costumer Madeline Lee. “The play will surely touch the heart of anyone with a family . . . . it reveals the fact that the family is stronger than the sum of its parts . . . . I think the playwright, Beth Henley, would approve.”

The Times Colonist also reviewed the show, describing it as being “smartly directed” by Theatre professor Peter McGuire, praising the cast and noting designer Stefanie Mudry’s “beautifully detailed set . . . is a pure joy.”

And Camosun’s Nexus newspaper said they “highly recommend this play and would go see it again. The show’s well-timed comedic nature doesn’t detract from the more serious parts of the story . . . . Overall, the whole production meets the high-quality standard that has been set by the Phoenix Theatre.”

And don’t miss the final mainstage production at Phoenix Theatre, The Comedy of Errors — a pop musical reboot of Shakespeare’s classic mistaken-identity farce. Directed by MFA candidate Jeffrey Renn, and running March 15 to 24.