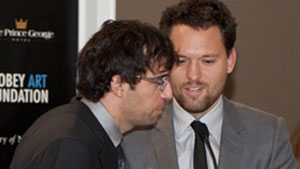 Anyone who likes to keep track of our Fine Arts alumni will be forgiven if they’re having trouble keeping up with all the media coverage of late—fortunately, that’s why we’re here!  Here’s a few links to check out:

CBC recently picked up the news about Visual Arts alum Christian Giroux‘s $50,000 Sobey Award win. Giroux, together with artistic collaborator Daniel Young, picked up the prize on October 13, with the jury noting, “Young and Giroux reflect a curious world where digital interfaces have become an inextricable part of our lives.” Giroux attended UVic’s Visual Arts program back in the late ’90s. 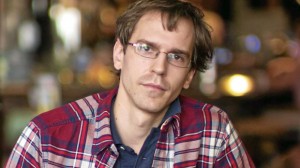 Hot on the heels of his recent £15,000 BBC National Short Story Award, writing grad Rosemary Westwood has written about Writing grad D.W. Wilson for the Globe & Mail. Wilson’s winning short story, “The Dead Roads”, can also be found in his newly published debut, a collection of short stories called  Once You Break a Knuckle. Wilson was also featured on CBC Radio’s North by Northwest on October 23, talking about his recent win with host Sheryl MacKay.

You can also read a review of Wilson’s debut courtesy of Jim Bartley in the Globe and Mail. (“‘Write what you know,’ the old-school saw to aspiring authors, has taken knocks over the years, but Wilson does a stunning job of resurrecting its prescriptive force. His fractious Kootenay town of Invermere rings with authenticity.”) And, not to be left out, the National Post ran this interview with Wilson on October 28. (“Wilson’s version of [Kootenay] Valley is a slightly mad and lawless place, full of senseless violence, petty vandalism and long-running feuds.”)

And the media machine that is Writing grad and former Writing instructor Esi Edugyan continues to provide headline fodder, despite not winning the Man Booker Prize this week. A recent piece in the Vancouver Sun previews her appearance at the Vancouver International Writers Festival. Expect more pieces about Edugyan as the dates approach for her standing nominations in the $25,000 Governor General’s Literary Award, the $50,000 Giller Prize and the $25,000 Writer’s Trust prize. Not that it’s all about the cash, of course . . . it’s also about the fame.

If you’ve only read about it but not cracked the actual book yet, the Globe and Mail has kindly provided an excerpt from Half-Blood Blues for your enjoyment.