Never let it be said that children are a distraction from academic studies. Just ask Writing grad Kyeren Regehr, who picked up this year’s Victoria Medal for highest GPA in the Faculty of Fine Arts—despite being the mother of two. Teetering on the edge of 39, the Australia-born Regehr’s kids are now 14 and 4—which, when you add in the fact she did her BA in five years, means she was not only a mom coming in but also gave birth right at the start of her undergrad. What’s the secret to her academic success? “I’ve got one of those devoted, understanding, ultra-supportive super-husbands every woman dreams of marrying,” she says with a characteristically quick laugh. “He’s amazing, and has been the backbone of my degree.” 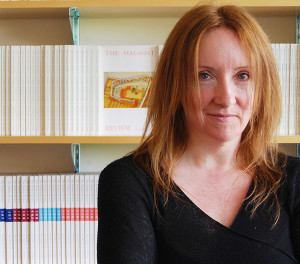 That may be true, but this double-major in poetry and fiction still had to do the work herself—and she did it well enough to get accepted into a poetry MFA for the fall semester, with recent Craigdarroch Award winner and Royal Society fellow Lorna Crozier as her advisor. “I’m so thrilled and fortunate to be doing it,” says Regehr. “It’s such a hard department to get into—they only take one person per genre for a Master’s, so I’m very, very lucky.”

One of the advantages of being a mature student, says Regehr, is that she came into the Department of Writing with both a strong background and a proven work ethic. “I had a career in performing arts already and I have taught extensively, so this is like my second career,” she explains, adding that being a parent actually helped her study. “When you have so little time, it makes you really focus on every spare minute. Good grades equal good funding, so I had incentive to work.”

She even managed to find time to volunteer as the poetry board intern for The Malahat Review, screening exactly the same kind of poetry submissions she’s been sending out herself to other literary publications. “I’ve spent hours labouring over submissions, making sure i’m being fair, finding what needs to be passed on.” she says. But does Regehr have any concerns about the reality of “making it” in such a less-than-lucrative literary world? “Poetry always prevails, even if it’s just read by other poets,” she sighs. “It’s like philosophy, right? You have to write what you have to write. Poetry is like an archive of the consciousness of the time; even if it’s not widely read, it’s like a blueprint for where we are in our minds.”

Does that make the fiction part of her studies the more, uh, financially viable venture? “Certainly, genre fiction is more lucrative—I always thought i’d be writing fantasy when i was younger—but now i’ve swung toward writing literary fiction,” says Regehr, citing the influence of fiction profs Bill Gaston, John Gould and Steven Price. “I’m about 50 pages into writing a novel and I’m really happy with it; it’s lovely to work on something that can stretch into the future, something you can get your teeth into over a long period of time. Hopefully my Master’s will produce a decent manuscript of poetry, but I would like to teach writing. I’ve always loved teaching.”

Ironically, her summation of what it takes to make it as a writer could also describe her life as a parent. “You have to have a thick skin, faith in your work and a healthy helping of determination.” Clearly, Kyeren Regehr has all three.