Get your game on

If you still think video games are mere distractions that don’t really matter, it’s time to get into the 21st century—where gaming is a $2 billion industry in Canada alone, generating $24 million in Victoria. Expand that worldwide and you’re looking at $63 billion in 2013, with projected growth up to $78 billion by 2017. 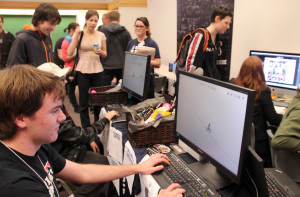 Participants at UVic’s Games Without Frontiers conference in 2013

According to the recent economic study Getting Our Game On: An Impressive Growth Snapshot of Victoria’s Digital Gaming Industry, Victoria’s gaming sector currently boasts 19 studios, employs 240 people and spent most of that $24 million on research and development—and most of those studios are looking to hire co-op students and graduates.

All of which makes it the perfect time to launch the new Technology & Society course The History of Video Games and Interactive Media. Sponsored by Fine Arts, this recurring T&S elective is set to investigate the intersection of technology, society, the entertainment industry and the creative arts through a study of video games and gaming culture. (Technology & Society Director and Writing professor David Leach also organized the extremely popular and successful gaming mini-conference Games Without Frontiers at UVic’s IdeaFest in 2013.) 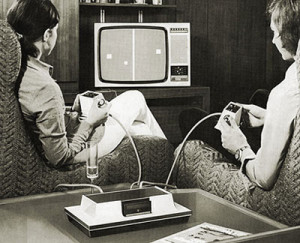 Helmed by sessional instructor Ashley Blacquiere, The History of Video Games will look back at not only influential games and designers, evolving genres and technological innovations but will also study the integration of sound, visual art, narrative and interactive game play. Classes will consider emergent sub-cultures and online communities while debating social controversies, media depictions and the internationalization of gaming culture.

“The chronology is the backbone of the course, but we’ll jump off into different topics of game studies—gender representation, violence, things like that,” says Blacquiere. 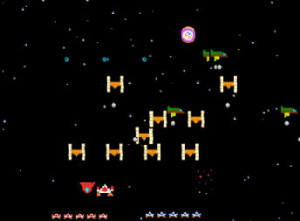 And while most people over the age of 40 probably think of Pong as the earliest video game, Blacquiere can trace it back even further. “Pong was popular in the early ‘70s, but you can step back at least a half-dozen years earlier,” he says. “Space Wars is largely considered the first real video game and was developed on a mainframe computer at MIT by a group of ne’erdowells who thought the computer could better be used to create something fun than for academic purposes.” 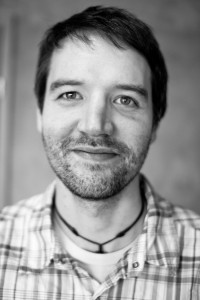 A life-long gamer, practicing video game designer and educator, Blacquiere holds a B.Sc. in Mathematics from the University of Prince Edward Island and a Masters of Digital Media from Simon Fraser University’s Centre for Digital Media. He has worked on a variety of games, ranging from small experimental/indie games developed solo or with small teams (Big Hadron Games), through mid-sized social games played through Facebook (Gnosis Chinese Checkers, Kingdom of Thrones, Viking Clan), and large AAA productions with major game development studios ([PROTOTYPE 2], Dying Light). He is particularly interested in the design of digitally “enhanced” games played in social spaces, and games that explore social connections.

As such, Blacquiere intends to provide students with more than just a history of the industry. “Hopefully they’ll come away with a better critical understanding of games,” he says. “It’s easy to pick up a game and play it without thinking about it too much, but there’s such a wide variety of media out there these days that don’t fit in the traditional definitions of what a game is.”

While no actual gaming background is required for the course, an open mind is definitely an asset—especially when it comes to the “interactive media” aspect of the course. “If you look at any other medium—a film or novel, for example—it exists in its own world. With a movie, you’re a passive participant in a story and with a novel, you live in the character’s head,” he explains. “But with games, you have an interactive media and can really live the experience. Looking at the history of games lets us think about the different types of experience we can share and, looking forward, imagine new interactive scenarios and opportunities. As games mature, they can provide us with alternative viewpoints and new perspectives.” 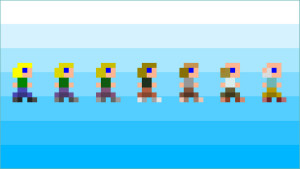 Passage takes you through life’s journey

Case in point? The recent “game” Passage, where the player ages—and dies—all in five minutes. “There’s very little ‘game’ in the experience, but the point of death is very poignant,” says Blacquiere. “It’s been able to provide an experience to people who have never had a moment of loss before. There are people who say they truly cried at the end of the game—which, incidentally, is Steven Spielberg’s metric of whether a game has reached the form of ‘high art’.”

Blacquiere points to Passage as a simple example of where the industry is going. “There are all sorts of things out there that are very different from the traditional definition of game; they’re interactive experiences with value, but where do we fit them in the broad gaming sense? That’s what I hope students come away with—a broader perspective.”

Finally, will there be any actual gaming going on in class? “I hope to have one game per class available for students to play, starting with a Java version of Space Wars,” he chuckles. “I’m going to try and match the games to each lecture.”