Musician, conductor, educator and a legendary figure in the UVic School of Music pantheon, Professor Emeritus George Corwin passed away in his sleep on March 28 at the age of 91. But his influence, wisdom and indomitable love of music will live on through the generations of musicians he inspired.

Growing the School of Music 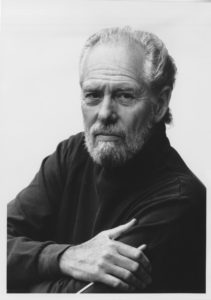 During his more than 25 years teaching at UVic, from 1969 to 1995, George helped grow the School of Music to over 200 students and 22 faculty members; directed the UVic Orchestra, UVic Chorus, Chamber Singers and Sonic Lab; and was central to the design of the Farquhar Auditorium in the University Centre—a particular triumph for him when it opened in 1978, and still used by the Orchestra and Chorus to this day.

Refusing to let retirement slow him down, George travelled to Thailand in 1994 to teach and direct the orchestra at Bangkok’s Chulalongkorn University, formed the ensemble Concentus Corvinus in 1995 and continued to direct many local ensembles—notably the Victoria Gilbert & Sullivan Society, the Victoria Operatic Society, the Civic Orchestra and the DieMahler Ensemble. Indeed, George’s final performance was on Feb 28, 2020—only a month before his death—with the DieMahler Ensemble.

“He loved music,” notes fellow School of Music Professor Emeritus Dr. Gerald King, former conductor of the UVic Wind Symphony. “He was a fine musician, conductor—always prepared—[and] a wonderful model for all of us. It is with great sadness that I write this; however, there is much joy in what I learned from this amazing man, musician, colleague and friend.”

A major influence on several generations of students, it was in his role as teacher that George left his most lasting legacy. 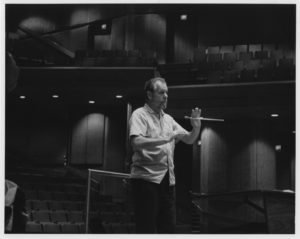 “Dr. Corwin is the reason I conduct,” says Music alum Kathleen Mulligan on this page of reminiscences. Now a music educator based in New Zealand, Mulligan says his influence was invaluable. “His process of teaching these skills through The Messiah gave me all the tools I needed to work with wind bands big and small, beginner to advanced. I loved those classes . . . . thanks for the music, George.”

“I have fond—and terrifying—memories of playing and singing for Dr. Corwin,” says Music alum Nick Apivor. “He was tough on us all and didn’t put up with any BS, but it was only because he cared about the music and cared about us as musicians. His influence on generations of musicians is enormous: he prepared us for the real world, he showed me the difference a fine conductor can make on an orchestra, and he exposed me to a world of beautiful classical music that I treasure. Such a gift!”

Describing him as “a profound presence in the Victoria music community,” alum Alan Riches recalls George as “a formidable presence, [but] he always approached his instruction in a calm and learned way. I loved my time under his tutelage while a member of the UVic Orchestra.”

“He was the most amazing man . . . I value all the things he taught,” notes Carrie Taylor, while fellow alum Ken Brewer says, “I am the musician I am today because of the tutelage of this strong man. He is in my heart and soul forever.” 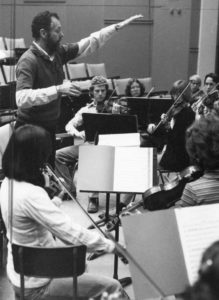 Corwin at a 1977 UVic Orchestra rehearsal

Born in Goshen, New York, in 1929, George’s love for music first started at St. Thomas Choir School in New York City, which he attended from the ages of seven to 12, becoming a lead soloist; his musical studies in orchestra and choir continued at the Newburgh Free Academy, after which he joined the United States Marine Corps at 17, serving in both Hawaii and Korea. After his discharge, he enrolled in the Ithaca College School of Music, where he performed in orchestras and bands as a trombonist and percussionist, and also continued to sing; it was at Ithaca that he met his future wife—Joanne Elizabeth Bahn—on a blind date, where both completed their degrees in Music and married in August 1953.

In 1960 George was invited by noted American composer Howard Hanson to join the conducting staff at the famed Eastman School of Music in Rochester, New York. “Howard Hanson was the most important figure in my entire life as a musician and teacher,” George recalled. “Hanson put me in classes that he knew I was capable of teaching, and at the same time they were classes that would help me advance in my career.”

Conducting the Eastman Philharmonic, Symphony Orchestra, Chorus and becoming music director of the Collegium Musicum, George completed his doctoral studies and taught for two years at Indiana’s Ball State University before coming to Victoria in 1969 at the invitation of then-Chair of Music, Phillip T. Young, to develop UVic’s orchestra and choir.

“A major figure in my life”

But few can articulate George’s influence more than alumnus and noted Vancouver composer David MacIntyre, who recently retired as chair of the Music program at Simon Fraser University’s School for the Contemporary Arts, where he taught for 38 years following his studies at UVic. 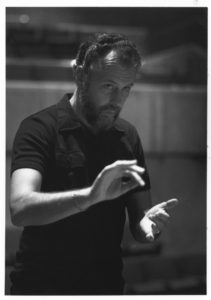 “I first met George Corwin when I transferred to UVic as a fourth-year undergrad in the fall of 1973. Although I was a major in music composition, I knew from the moment I met him that he was going to be a major figure in my life,” says MacIntyre.

“Indeed, he became exactly that and my life is richer simply for having known him—but he was more than a teacher. He was a mentor and guide from the end of my undergraduate studies until I’d finished grad school and I’d been appointed to a tenure track position at SFU. Then, he became my friend, a close and valued friend, one of those rare friends that you can count on as long as you live your life. And I counted on him and he was there for me—from my appointment at SFU at the tender age of 26 until the day he died. Coupled with the six years I was his student both as an undergrad and grad student, I’ve known George Corwin over 50 years—and, you know, the man grows on you!”

“If you love music—in all its breadth, width, depth, height and joy—then you can’t help but love that man,” he continues. “He was serious about the art of music, extremely serious, extremely demanding. And he demands the same of every musician he works with. He never says it, of course, because the great ones never do. He simply is demanding of himself and of you.”

“George Corwin was a class act like no other. He was a man of extraordinary knowledge and love of music. One cannot conduct so many works without the depth of love and study he brought to every score he encountered,” MacIntyre concludes. “Music has rarely had such a faithful servant.”

As noted in his Times Colonist obituary, composer Igor Stravinsky once said to George, “Young man, your job as a conductor is not to interpret the composer’s music. It is your job to find the composer in his music and allow him to speak.”

George will forever be remembered for finding the composer’s voice and allowing us to experience the joy of music with him.