All in good fun 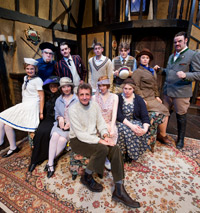 Looking for a good belly laugh? Don’t miss Phoenix Theatre’s latest production, Rookery Nook, a 1920s British farce written by Ben Travers and directed by Bindon Kinghorn. “Farce is a fine line between satire, which makes a point, and just a gentle prod in the ribs,” explains Kinghorn. “No one is meant to be offended by any portrayal of themselves on the stage; it’s written for pure fun and enjoyment.”

Most often associated with plays by the likes of Oscar Wilde (The Importance of Being Earnest), Noel Coward (Blithe Spirit), Joe Orton (Loot) and Michael Frayn (Noises Off), or filmed productions like the Carry On movies or the classic John Cleese TV series Fawlty Towers, British farce is meant to be just good fun. “There’s no message in it—it’s just a bit of hilarious silliness,” says Kinghorn. “Most of the gags that you see on the stage—which are not in the script—are all devised by ourselves from the cast. All we’ve done is try and choreograph them.”

As he explained to Adrian Chamberlain in a Times Colonist preview of the show, Kinghorn first worked on the play back in 1968 in England, when he was an assistant stage manager at Bristol Old Vic for the historic Theatre Royal. (“I swept the floors, I brought coffee and occasionally touched the set or props.”) Now nearing retirement, Kinghorn liked the idea of bookending his career by coming back to the Nook. “I had a life on stage and behind stage and I remember it with great fondness,” he said. “At this stage in my career, I felt I might go back to it. Rather than being the lowly ASM, I’d be the director.”

UVic student Jamie Tanner has also created a dandy video preview of the show, which takes you backstage, through the set and into a conversation with Kinghorn himself. Keep your eyes open for the steaming ears and cat on the fly.

Update: Adrian Chamberlain has now reviewed Rookery Nook, giving it 3 1/2 stars and noting, “This two-hour play, revived by the University of Victoria’s theatre department, is quite a bit of fun. And the UVic crew has done a tremendous job. Bindon Kinghorn’s clever direction is relentlessly zippy, with great emphasis on zany physical hijinks. A well-rehearsed student cast does well, balancing a sometimes dense script with hyperactive movement. The set and costumes are truly lovely – a triumph for the design team.”

Among Chamberlain’s standouts are student actors Derek Wallis, Jonathan Mason, Lucas Hall and Brooke Haberstock. “These young players possess seemingly endless energy. This is harnessed into a myriad of physical routines so well-choreographed and executed, at times it recalls modern dance.” He also gave props to set designer Jessica P. Wong (“[her] Tudor cottage shows painstaking attention to detail—the functional interior looks absolutely authentic and is key to this production’s success”) and costume designer Kat Jeffery (“[the] costumes are rooted in historical accuracy; at the same time, she has fantastical fun with them.”)

And Chris Felling of Culture Vulture Victoria has also weighed in, calling Rookery Nook “a fast, shallow but extremely satisfying comedy.” Felling also noted the “design . . . is superb. The first rise of the curtain was met with gasps and murmurs from the audience.”

“After being underwhelmed by Love Kills I was tickled to see something completely different mounted at the Phoenix,” Felling concludes. “Variety has always been one of student theatre’s strong suits and Rookery Nook has the added bonus of looking as professional as they come.”

Finally, Nadia Grutter of UVic’s own Martlet says, “Once you see the Phoenix’s Rookery Nook, you’ll be in on the joke. The play’s director (and dedicated Phoenix Theatre manager), Bindon Kinghorn, matches writer Ben Travers’ brilliant script with his own careful attention to detail, impeccable comedic timing and a real eye for farce in this 1920s comedy . . . . Rookery Nook’s shenanigans are not to be missed. Just try to keep a straight face—I’m sure you won’t be able to.”