Congratulations to Department of Writing chair Bill Gaston for winning the Gold award in the Fiction category at the recent National Magazine Awards!

His winning story, “Four Corners”, appeared in Event magazine’s Winter issue (40/3). Event is Douglas College’s thrice-yearly literary review, and has been publishing award-winning fiction, non-fiction, poetry and reviews for over 40 years—without sign of slowing down. 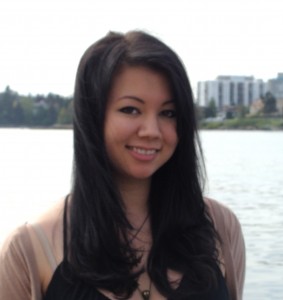 Meanwhile, fourth year undergraduate Writing student Cody Klippenstein has been announced as the winner of the 2012 fiction prize for The Fiddlehead. Her winning story, “We’ve Gotta Get Out of Here,” was originally submitted as a piece for a Department of Writing workshop class led by Writing associate professor Lee Henderson.

“I remember Cody delivered a great, visceral, cut-from-life first story to the workshop—and then she said she really wanted to write a story from the point-of-view of a house cat,” Henderson recalls. “I figured she could pull it off. But then she handed in a story from the point-of-view of an Asian punk girl living in Vancouver in the early 1980s, dating a musician, and going to see bands like the Pointed Sticks.” 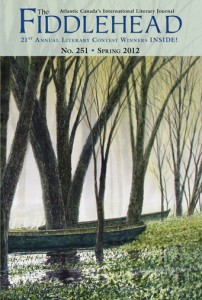 Henderson describes that story—”We’ve Gotta Get Out of Here”—as “basically pitch-perfect.”

“The class made some basic suggestions for a polish and Cody went back and brushed the story up however she saw fit, sent the story out and won the Fiddlehead fiction award,” he says. “This was an exceptional class of writers, too, so I view this win as just the tip of the iceberg in terms of the amazing stuff I saw that semester.”

You can read an excerpt from “We’ve Gotta Get Out of Here” on The Fiddlehead‘s blog—or you can pick up the Spring 2012 issue, which also features a story by Writing alum Yasuko Thanh.

Update: in July, Cody Klippenstein also had a new story published in Joyland, a literary magazine that curates fiction regionally. Selected by Vancouver editor Kevin Chong, here are the opening paragraphs to her story, “Thrown Overboard, Manacled in a Box”—but be sure to click over to the Vancouver page on the Joyland site to read the whole thing.

“Cale is treading water in the middle of the deep end, water sloshing in his ears and lapping at his chin as he listens to the aqueous echo of the moon-faced timer at the end of the pool wind and wind and wind. How many seconds left? He tries to breathe.

“He closes his eyes. When he opens them again, Lula’s orange-sandaled feet have appeared beside the timer, slapping impatiently at the wet tile.

“Yo, she says, and raises an arm. Inside the YMCA’s humid, windowless indoor pool, her shrill voice is amplified.”