Betty Waynne Allison is married to her role 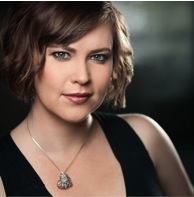 Betty Waynne Allison has the title role in Mary’s Wedding

Double UVic graduate Betty Waynne Allison is certainly getting her fair share of the media spotlight this month. A graduate of both the UVic education program and the music education program ((B.Ed & B.Mus ’05), this talented soprano is in the enviable position of debuting the title role in the world premiere of Pacific Opera Victoria’s Mary’s Wedding.

Based on the 2002 play of the same name, POV’s new opera version features music by composer Andrew MacDonald and libretto by original playwright Stephen Massicotte, who have created a powerful and emotional role for Allison. “It’s wonderful to be back,” says the Ladysmith-based Allison of her return to Victoria. “It’s home and that is a special feeling in this business . . . Since day one, POV has been a supporter of mine and I feel honored that they are taking this chance on me. We all believe in this show and it is rare to be afforded the opportunity to create a brand new opera character.” 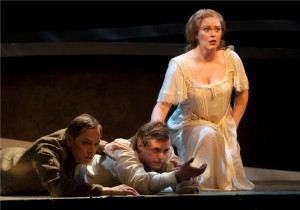 Ironically, however, opera was not Allison’s only focus while during her undergrad years. “While at UVic I never dreamed or even thought about being a professional singer,” she admits. “My focus was on learning to play all the band instruments and education technique rather than learning performance techniques.”

Now a full-time opera singer, Allison’s career is definitely taking off. She is an alumna of the Canadian Opera Company Ensemble—where her roles included Fiordiligi (Così fan tutte), Donna Anna (Don Giovanni), Tatyana (Eugene Onegin) and Rusalka (Rusalka)—and she also performed the Countess (Le Nozze di Figaro) with the Centre for Opera Studies in Sulmona, Italy; the title role in The Cunning Little Vixen in a new production at the Banff Centre; the First Lady in the COC’s The Magic Flute; and Alice in Falstaff with L’Opéra-Théâtre de Metz Métropole, France. Next spring she will take on the title role in Susannah with Florentine Opera.

Given that it’s the world premiere of a decidedly Canadian story, media coverage of Mary’s Wedding has been expectedly brisk—including Marsha Lederman’s preview in the Globe and Mail, a cover story in Monday Magazine, a nice Q&A with Allison in the backpage “Secrets & Lives” column of Boulevard magazine’s November issue, a review by Monica Prendergast on local CBC morning show On The Island, a review—by yours truly—for the local online arts mag Culture Vulture Victoria (“Allison is absolutely the star here, and not only because she plays the title character. Breathing real life into Mary, Allison hits all the right notes—literally and figuratively; her emotionally complex character is as enjoyable to watch as is her powerful, yet fragile, voice”) plus both a preview and review in the local Times Colonist, where Kevin Bazzana notes, “The fresh-faced young singers portraying the central couple—soprano Betty Waynne Allison and tenor Thomas Macleay—have personable voices that are fortunately not out of proportion to the characters or story or venue . . . Crucially, both have real acting talent; their various encounters are sweet, touching, funny and genuine.”

The TC also highlighted UVic’s companion exhibit, The World of Mary’s Wedding: Reminiscences of WWI, running through to November 17. 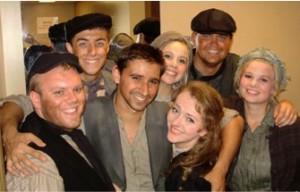 Having the opportunity to work with the Opera Company has given these students a valuable glimpse into the world as a professional musician. “POV has shown me what the real world is like,” says Jeremy Roszmann, a fourth-year student. “The ability to study professionals in their element—without feeling like an intruder—is invaluable experience and education.” First year Master’s student Anna Shill, felt honoured to be a part of the production: “What can’t you learn from your peers and those ahead of you? Sharing space with people that spend their lives living the career you hope for puts everything that we learn at school into perspective.”

Hot on the heels of their Wagnerian experience, Andrew Buckley, Anna Shill and Cedric Spry are also appearing in the 20-person chorus for Mary’s Wedding.