For the past 10 years, students in UVic’s Department of Writing have benefited by learning from veteran journalists and authors, thanks to the Harvey Stevenson Southam Lecturer in Journalism and Nonfiction.

Named for UVic alumnus Harvey Southam — who, before his unexpected death in 1991, worked as a journalist before serving as director for a number of companies owned by one of the country’s leading publishing families — this influential journalist-in-residence program sees a mid-career writer join the Writing department each year to teach a course and give a public lecture on their chosen topic. Courses have varied widely, ranging from print and broadcast journalism to sports, humour, popular culture, Indigenous perspectives on storytelling, and changes in the media landscape itself. 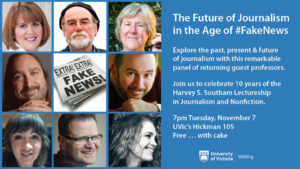 Now you can join the Writing department in celebrating a decade of this prestigious position with a special 10th anniversary panel: “The Future of Journalism in the Age of #FakeNews” brings six former Southam Lecturers together for the first time for a lively moderated discussion at 7pm Tuesday, November 7, in room 105 of UVic’s Hickman Building.

“The idea for the panel was sparked by a perfect convergence,” says Writing chair David Leach, author of Chasing Utopia: The Future of the Kibbutz in a Divided Israel. “A chance to mark the 10th anniversary of the Southam Lectureship, the opportunity to thank the Southam family for their generosity, and to respond to a sense of global urgency around the role of journalists as guardians of our democratic institutions — especially when the most powerful elected official on the planet keeps attacking the free press as #FakeNews.”

Leach, who will act as emcee and moderator, will be joined by recent Writing grad Quinn MacDonald — now the publisher/editor of the local urban agriculture magazine Concrete Garden — as well as six returning Southam Lecturers:

“All were keen to talk about their experiences as guest lecturers and debate the future of journalism,” says Leach. “Taken together, it offers a broad range of ways to look at contemporary journalism.” 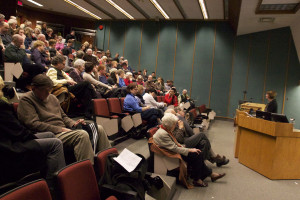 And it’s that diversity of voices and experiences that sets the Southam Lectureship apart from other courses with embedded journalists. “We try not to think of ‘journalism’ in too narrow or stereotyped of a way,” he continues. “We are always looking for a different voice, a different background, a guest lecturer who has an interesting ‘hook’ that will interest both our professional writing students and also curious undergraduates from across campus.”

Given the almost daily outcry over “fake news” — both real and perceived — in the media today, is Leach legitimately concerned about the future of journalism?

“Absolutely, we should all be. There are very powerful forces — political and corporate, domestic and international — feeding misinformation to the general public in ways that undermine our democratic institutions, increase inequities and even incite hatred against vulnerable groups of people,” he says. 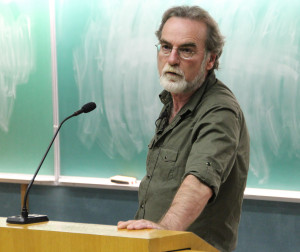 Terry Glavin at his lecture in 2012

“The role of good journalism has always been as a BS detector that speaks truth to such abuses of power. We need to remember and support that vital function before we all disappear into our private filter bubbles of socially mediated information in which we only hear echoes of our own points of view and declare anything contrary to our own biases as #FakeNews.”

Not that the solutions aren’t without their own challenges, says Leach. “How do we fund the time-consuming and often dangerous investigative work that is the beating heart of great journalism? And how do we inspire and train the next generation of intrepid writers and reporters to do that work?”

The answers to those questions will come from the panelists themselves, along with recent Writing grad Quinn MacDonald —  not only a graduate of the Professional Writing Minor in Journalism & Publishing and a teaching assistant for many of the Southam Lecturers, but is already out in the trenches herself. 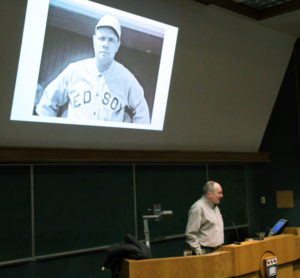 Tom Hawthorn’s sports talk was a crowd favourite in 2014

“Quinn is the future of journalism, so we figured we better get her thoughts,” says Leach. “I want to hear how she can connect the hard-earned wisdom from our six other panelists to the kind of journalism needed to inspire her generation . . . and the generations to follow.”

Read more about the Southam Lecture in this November 2 Times Colonist interview with David Leach.

Looking ahead to the next decade (and beyond), does Leach have a “dream list” for future Southam Lecturers? “I’d love to attract more writers and reporters with strong voices who are also shedding light on communities and stories that are under-reported by our traditional media: people like Kamal Al-Solaylee and his investigative book Brown: What Being Brown in the World Today Means (to Everyone), or culture writer Scaachi Koul and her work for BuzzFeed, as well as her personal memoir and Twitter presence. Or perhaps some of our own graduates, such as Rebecca Collard, who has been doing fearless reporting about the various conflicts in the Middle East.” 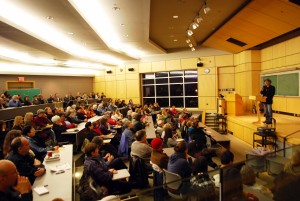 Finally, the evening will also include a memorial to former Southam Lecturer, Richard Wagamase, who passed away earlier this year. “His course challenged our students to think about First Nations history and forms of storytelling in new ways,” says Leach. “He was an amazing presence when he was here as a guest lecturer.”

And while this event celebrates the first decade of the Southam Lectureship, the 2018 Southam Lecturer is ready to go: Judith Pike is a social-issues documentary filmmaker, whose January class and public lecture will look at investigating and telling stories through film, and reaching different audiences.

Whatever the future holds for our students, there’s no denying the first 10 years of the Southam Lectureship have laid a strong foundation for whatever comes next.

This event is free and open to the public. It will be followed by a book signing and reception.