School of Music professor and internationally recognized composer Dániel Péter Biró will be spending the 2014/15 academic-year at Harvard University’s Radcliffe Institute for Advanced Study, thanks to the prestigious Fellowship he recently received—a first for the University of Victoria. But he is also currently engaged with his latest round of international projects as well. 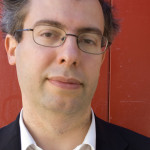 Biró’s new composition Al Ken Kara (That Is Why It Was Called) will be performed on July 26 at the Teatro Fondamenta Nuove in Venice, Italy. It was originally composed as part of the film project Mediterranean Voices, which premiered in February 2014 at the Eclat Festival in Stuttgart, Germany. Biró was one of 12 international composers invited to participate in the ambitious undertaking.

“It’s a project that incorporates video, architecture and music,” he explains. “There are six rooms, so in between pieces they go to these rooms where there are 12 video screens. The video artist traveled for eight months through 12 countries shooting different themes.”

Take a few minutes to watch and listen to the video of the premiere of Biró’s composition Al Ken Kara Kara as part of the Mediterranean Voices project. 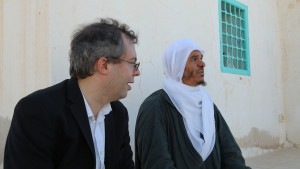 Mediterranean Voices explores themes like “public places” (religious buildings, demonstrations) and “borders” (both political and physical). Biró himself traveled to Tunisia in December 2013, where he visited the ancient El Ghriba synagogue in Djerba, an island where the oldest Jewish community outside of Jerusalem has existed for 2,500 years.

“My piece dealt with the problem of language in the Mediterranean. It’s based on the Tower of Babel, is written for seven voice and uses 36 languages,” he says. “It was quite intense at times in Tunisia due to the tense political atmosphere. We witnessed a major demonstration just in front of our hotel.”

Biró also just returned from Istanbul in June, where he was participating in the Fourth International Workshop on Folk Music Analysis at Bogazici University. The conference dealt with computational ethnomusicology, the study of indigenous musical cultures using cutting-edge technology.

When asked how he gets involved with so many global projects, Biró chuckles. “People actually know about Victoria through our contemporary music scene,” he explains. “Last year I was in Vienna and just met someone by chance on the street and they said, ‘Oh, you run the SALT New Music Festival.’ So people know Victoria is a place for contemporary music composers. There’s a long history of this also—Victoria has always been known as kind of a weird place, a place for experimentation. Our students also go out into the world and they continue, and come back here.“ 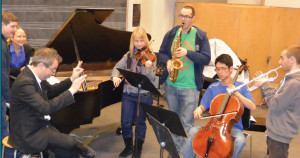 Biró feels the School of Music‘s alumni also enhance our reputation. “We just had our interviews with potential student composers and we asked them why they came here to Victoria and a number of them said, ‘I met this former student who said I should come here.’ So our students in the world are spreading the word that this is a place where students can develop a voice, experiment and do things.”

Ultimately, Biró sees the School of Music—and the Faculty of Fine Arts as a whole—as something of an incubator. “It’s small enough and lively enough that people are able to develop things here and not get too distracted,” he says. “That’s also a strength we have in our program too—a lot of people go to McGill or other large schools and they say it’s really a factory out there. But we’re not a factory; we’re small and personal and that’s necessary for not only acquiring skills but for incubating material.”