Two recent new public art pieces have been installed by Visual Arts faculty members in different locations across Canada: For Everyone a Sunset by Robert Youds was just unveiled at the Vancouver Art Gallery, while High Five by Jennifer Stillwell is now reaching for the sky in Winnipeg. 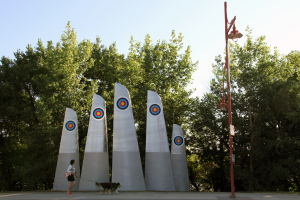 Stillwell’s large-scale, site-specific commission High Five was recently installed on Waterfront Drive over the left field wall of Winnipeg’s baseball park. Standing 25 feet tall, seven feet wide and six inches deep—but designed to offer a bit of an optical illusion—High Five was designed to resemble either wings, fins in formation, an abstracted human hand . . . or even a baseball glove.

“I wanted to create an artwork where image and meaning are not fixed but flexible with changes in perspective and movement,” says Stillwell. “Even though the size of each the pieces are the same, I worked with the slope in order to create the shape of a human hand from a distance.” 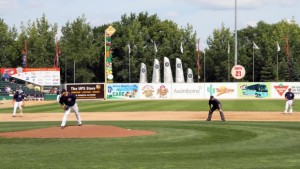 “Hit for the sculpture!” Stillwell’s piece in context of the baseball diamond

As for the “targets” on the sculpture, the artist says they have multiple meanings: abstract fingerprints, roundels on an airplane wing, archery targets, advertising graphics and, of course, actual targets. “They playfully address the baseball diamond and the home run potential of hitting the art,” she says. “A baseball player even hit one of the sculptures during batting practice!” 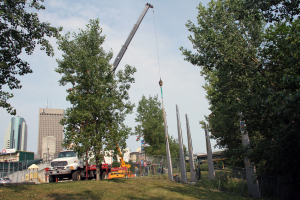 Talking to Winnipeg CBC in this piece, Stillwell explains that her pieces never have just one meaning.  “With my work I tend to try to play around with images and meaning and just trying to allow people to interpret it in more than one direction.” She also received coverage in this Winnipeg cultural blog for the artwork which was originally commissioned as part of the redevelopment of Winnipeg’s Waterfront Drive; the project has been managed by the Winnipeg Arts Council on behalf of the City of Winnipeg.

As the VAG explains, “For Everyone a Sunset draws upon the architectural vernacular of downtown Vancouver [and] references the urban surroundings by using their associated materials—aluminium framework, salvaged glass, LED lighting—to construct a sculptural query that creates a space for audiences to contemplate the urban experience.”

The piece will be on view until March 30, 2015, at the base of Vancouver’s vaunted Shangri La Hotel.

The original concept sketch envisioning “For Everyone A Sunset”

Existing in the space between architecture and design, uniformity and variety, For Everyone a Sunset highlights the intersection of built and natural environments. It measures 30 feet long by 12 feet high and 10 feet wide.

“Shifting tonality as it moves through laminate coloured glass, the light in Youds’ work captures our gaze and holds it suspended, suggesting a plenitude of possibilities amidst the 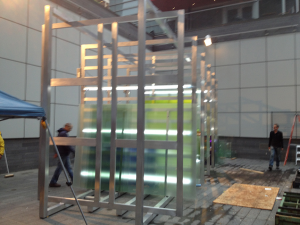 As part of the commission, Youds also gave an artist’s talk on October 25, addressing the range of materials generally in his work and specifically with this  installation. VAG’s Offsite is funded by the City of Vancouver through the Public Art Program.