With puﬀy white features and a lovable personality, the Perogy Cat is an iconic local comic character whose popularity has inspired art projects worldwide. Now the plump feline ventures onto the high seas in The Perogy Cat, a hardcover kids’ book illustrated and written by Gareth and Bronwyn Gaudin — with an assist from a Canadian pop music superstar. 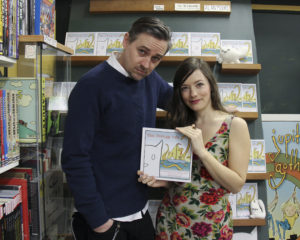 The Gaudins met while at UVic, and Gareth invented the cartoon as a way to capture Bronwyn’s heart. Turns out, it worked.

“Bronwyn was my crush and I only knew that she had a diabetic cat named Tabitha, so I created the Perogy Cat as a way to raise money for her cat’s insulin,” said Gareth, who is also co-owner of Legends Comics and Books and recently finished two years as artist-in-residence at the Royal BC Museum.

The same year Perogy Cat was conceived, 2003, they both completed their UVic studies — Gareth, with a Visual Arts BFA specializing  in drawing and painting, and Bronwyn with a History in Art degree with a minor in Women’s Studies. The fact that the book includes a Perogy Cat theme song written and sung by Ed Robertson of the Barenaked Ladies doesn’t hurt; Robertson also recorded a dramatic reading of the book. 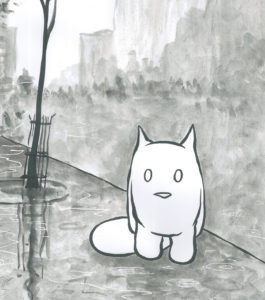 Perogy Cat, by Gareth Gaudin. Based on Spring Showers (1901) by Alfred Stieglitz.

“He is a collector of our art, and whenever he’s in town we hang out,” says Gareth about Robertson. “I told him about the book deal, and he seemed excited enough to write a Perogy Cat theme song for it. We didn’t ask him. It just showed up, and that was really exciting.”

Gareth has also achieved a measure of fame thanks to his cartoon-a-day-for-life project—chronicled in this Globe and Mail profile—which he started on July 27, 2004, and plans to continue daily through to his death.

Other recent projects include collaborating with spoken word artist Shane Koyczan on the book Silence Is A Song I Know All The Words To, and the related videos “Troll” and “Shoulders” (the latter with David Suzuki), as well as producing music and music videos for local and international bands including Kathryn Calder of The New Pornographers.

In addition to their children, since 2013 Gareth and Bronwyn have also been collaborating on Enid Jupiter & Lyra Gotham: The Monster Sisters. Inspired by their daughters—who, not coincidentally, share the character’s names—as well as Victoria’s history and architecture, The Monster Sisters is an ongoing comic book series about the adventures of an intrepid sibling duo. (Find out more about The Monsters Sisters in this Shaw TV video and this Monday Magazine article.) 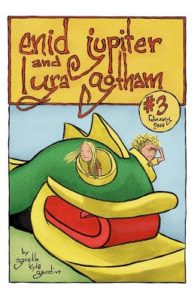 The Monster Sisters save Victoria!

Bronwyn says that she learned a lot about being a working artist while watching Gareth at UVic, and that the two work very well together on projects like this book, even if it’s not always easy.

“We both struggle with diﬀerent styles of procrastination. I guess that’s our biggest challenge,” she says. “Sometimes I feel I need to stand firm about the art direction of a project but I also fully trust Gareth’s vision. That’s something I learned quickly observing Gareth — to trust his vision and trust his process.”

And there’s also a lot of trust put into that comic character first created during UVic classes. “Perogy Cat has been such an idol and totem and talisman for us,” says Bronwyn, “far more than we could ever have known back when Gareth drew him in a late-night class of Southeast Asian art.”

—written by Greg Pratt, with files from John Threlfall. A version of this story originally ran in the Spring 2016 issue of UVic alumni magazine, The Torch.