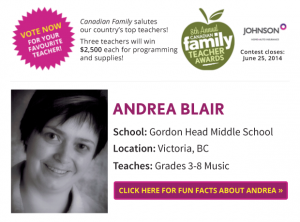 School of Music alumna Andrea Blair has been nominated as one of Canada’s top teachers by Canadian Family magazine.

Blair, who received her Masters in Music Education in 2007, is among the top 12-finalists selected in Canadian Family’s annual awards—only one of two teachers from BC, and the only one on Vancouver Island. “It was completely out of the blue,” says the Gordon Head Middle School music teacher, who has now been teaching for 19 years. “It’s quite an honour to even be nominated and be one of the 12.”

The awards are decided by reader voting, which means Blair needs as many votes as possible before the June 25 cut-off date; click here to vote—and you can vote from any device once a day, so don’t be shy. (As of this writing, she’s in second place!) The teachers with the top-three vote tally will each win $2,500 for their schools. 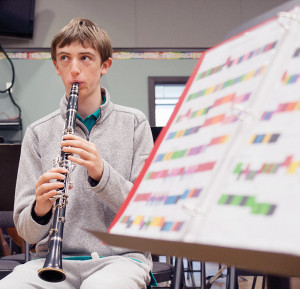 But it wasn’t like Blair put herself into the running—she was actually nominated by the parent of one of her students, Daniel Davenport. “My son has learning disabilities—he is dyslexic and dysgraphic,” wrote Leslie Davenport in her nomination letter. “When he started middle school he told us he wanted to join the band. The problem was that he was incapable of reading music. I approached the music teacher, Mrs. Blair, and asked if he might be able to join in some way. I was thinking of him banging a tambourine or something. Mrs. Blair said she would find a way. This started a three-year project of my son’s journey into music. For Mrs. Blair, it was not enough for him to just do some simple percussion; instead, she designed a whole new sheet music system for dyslexics.”

Having dyslexia and dysgraphia means Daniel can’t read or write either music or the English language—but, thanks to the creative and continued efforts of his dedicated band teacher, he is now playing clarinet in the school band.

Read more about Andrea and Daniel in this recent Victoria News article. 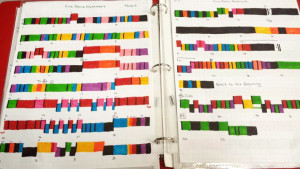 Blair was inspired by a toy xylophone with coloured bars and colour-coded sheet music to create a musical system that didn’t rely on notes, bars and musical staffs. Instead, she used coloured markers and graph paper to create a system that Daniel could read and understand.

“I was taking a class with [UVic Music educator] Mary Kennedy and thought, ‘Why not just put it on graph paper?’,” Blair recalls. “So, a 2×2 block of squares represents a quarter note, and a half note would be four squares. It’s all based on math. You know how music sometimes gets all jumbled up? This is quite simple.”

Blair says she spends a “couple of hours” transposing the music for Daniel. “If I was going to do it for anyone else, I would use Excel, but for him it would be too much.” Obviously, her system works. “He’s doing pretty well,” she says of Daniel’s ability. “For the most part, he’s able to play all of our classes music.” 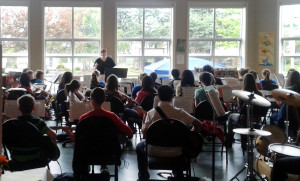 Andrea Blair leading one of her band classes

Given the success she’s had overcoming Daniel’s dyslexia and dysgraphia, does she see a future for her innovative system? “Yes, it’s got good potential,” she says. “My thing here at Gordon Head is inclusion for all, and this is a good system. I would definitely like to explore it more. Dr. Kennedy was saying to me, ‘Would you please start your doctorate?’” she pauses and laughs. “It’s a possibility.”

As for the prize, Blair doesn’t want to put too much thought into that yet. “The wish-list keeps growing,” she laughs. “The kids in my class certainly have some ideas about what’s needed, but we’ll deal with that when it happens—if it happens. I did tell Daniel he would be able to choose something for the room as well.”

Right now, Blair just needs people to vote. “You can vote daily, on as many devices as you wish,” she says. “It’s now literally a popularity contest—but everyone on the list is deserving.”

And that’s not false modesty—every teacher on the list has amazing stories to share. “When I got the email saying I was nominated, I went to my administration and said, ‘I really feel like I was just doing my job’,” Blair recalls.