Having just completed two consecutive years as the University of Victoria’s Audain Professor of Contemporary Arts of the Pacific Northwest, Jackson 2Bears doesn’t hesitate to identify what he felt was the best part of the position in the Department of Visual Arts. 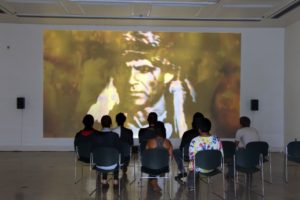 “Interacting with students and engaging with their research and creative practice has truly been the highlight of my two terms,” he says. “I have always aspired to encourage students to draw from their own life experiences as a source for exploring new creative possibilities.”

Two years in the position allowed 2Bears the space to develop both his teaching methodology and creative practice—a luxury not enjoyed by previous Audain professors Rebecca Belmore, Michael Nicol Yahgulanaas and Nicholas Galanin, who served one term each.

“Over the past years I have had time to really think about the importance of space, land and territory—as well as my place in the world as a Kanienkehaka [Mohawk] person, and the spaces I occupy as Onkwehonwe [an Indigenous person],” he says. “My meditations on ‘place’ have given me even more respect, and made me more appreciative of having been a visitor and a guest on Lekwungen territory during my Audain residency.” 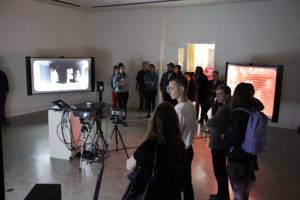 Students engage with 2Bears’ “For This Land”

One concrete result was For this Land, the first of a series of installation/performance artworks focusing on place and community. A collaborative project with Mohawk poet Janet Rogers, For this Land debuted at UVic’s Audain Gallery in September 2015; it was jointly inspired by Sioux philosopher Vine Deloria Jr.’s 1998 book of the same name and Chiefswood, Mohawk poet Pauline Johnson­’s childhood home on the Six Nations Reserve.

“Both my research and creative/artistic practice have led me back to Haudenosaunee territory, and back to Six Nations,” says 2Bears. “For several days Janet and I spent time on our home territory, exploring the heritage site and creatively engaging with the stories that Pauline left for us on the land. We documented elements of this—our actions, experiences and conversations—and created an aesthetic interpretation of our dialogues with this place, and in turn, the stories we wrote on the land.”

He also feels his creative focus has shifted due to his experience as Audain Professor. “I’ve come to realize that right now, the ‘work’ I need to do—not just as an artist, but as an individual—has everything to do with (re)connecting with my home, my community, my language, culture, people and land.”

Building on his time as UVic’s Audain Professor, 2Bears is now Professor of Native American Art Studio and Canada Research Chair at the University of Lethbridge. The Audain Professorship was instrumental in his being able to make the transition from PhD student to faculty member. “I look forward to sharing stories and times with all my new relations,” he concludes.