Fourth year Department of Writing student Grace Annear was recently announced as the only Faculty of Fine Arts student named to the 2014 University of Victoria Vikes Honour Roll. Annear specializes in cross-country running and track, and was one of 69 student-athletes honoured at the November 19 event at the University Club. 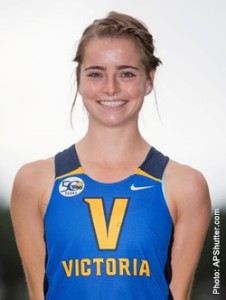 “I was recruited out of high school, but I came to UVic because of the Writing program and the varsity athletics,” says Annear.

Student-athletes can only earn a place on the Vikes Honour Roll by achieving a minimum of a 6.6 GPA (80%) during the school year, while training and competing at the highest level of sport. This is Annear’s third year being named to the Honour Roll—and, since she is also a Canadian Interuniversity Sport athlete, she was awarded a CIS Academic All-Canadian Certificate signed by His Excellency, the Right Honorable David Johnston, Governor General of Canada.

“It’s a lot of work,” she admits. “I have to be really focused with my time management—and my time management skills have increased dramatically, especially as the word counts increase in my upper-level courses. As an athlete, you’re used to doing a lot of homework on Friday and Saturday nights, so I don’t have as much of a social life as most university students might have. I guess my training is my social life.”

But while running may be the athletic passion of this Hampton, New Brunswick native—her athletic achievements include Canada West First Team All-Star, CIS First Team All-Canadian and a trio of gold-medal wins for both 400- and 800-meter races—Annear’s writing focus is clearly set on fiction. “Ian McEwan’s Atonement was the book that made me want to be a writer,” she says. “I read it when I was 13 and it was my first real ‘adult’ book. Before that I was reading things like Twilight, but Atonement was my immediate launching point into the world of real literature.” 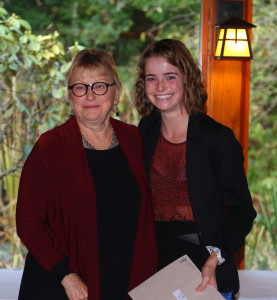 Annear sees a lot of parallels between her athletic and creative pursuits. “Being a distance runner is like being a writer—you have to be completely self-motivated,” she explains. “With running, it’s all about what you can do within yourself and then bring to the table on race day; with writing, it’s about how much you can pound out a good story. You don’t rely on anyone else, it’s just what you can do. If you’re motivated, and you want it bad enough, you can achieve in both areas.”

And has her running crossed over onto the page yet? “Every time I have a new professor, they ask, ‘Oh, have you written about running?’” she says with a laugh. “And I have—for every single prof—so now I’m trying to write other stuff.”

Annear says there is definitely a running/writing niche, but it’s not one to which she’s particularly drawn. “A lot of time it’s about marathoners and the self-reflection and peace and flow that comes with running—which is kind of true, but it’s very different than being a track athlete,” she says. “That’s a lot more intense, a lot more about launching yourself into the mind-numbingness of pain, to postpone that eternal struggle while you’re slogging through it.” 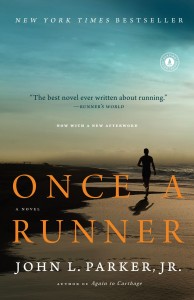 She can only point to one book that parallels her own experiences. “There is an iconic book called Once A Runner by John L. Parker Jr., which is basically about an American university miler during the 1960s, so it has a lot of historical context—but it’s more about what every college runner wants, this journey we all undergo. It’s the only book I’ve ever read that has captured what it actually feels like to be in a race, to undergo months and months of long training.”

In 2013-14, a record 2,863 CIS student-athletes across Canada achieved the prestigious Academic All-Canadian status, eclipsing the previous mark of 2,695 set a year ago.