Award-winning Medieval Studies student is on her own elf quest

When it comes to planning her academic future, Courtney Burrell looks to the past—which, for a Medieval Studies grad, makes perfect sense. Just don’t chuckle when you find out her current passion is elves. 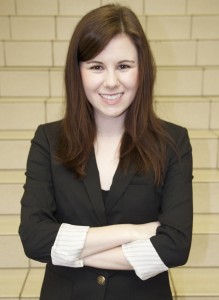 One of the highest-achieving students in the Medieval Studies program, Burrell not only runs the MEDI Student Union and helped organize this year’s interdisciplinary undergraduate  research conference, but has also twice won the Jamie Cassels Undergraduate Research Award and will be the only Canadian student presenting a paper at the prestigious sixth Nordic-Celtic-Baltic Folklore Symposium, happening in Tartu, Estonia, this June. Her subject? The Álfar—ancient Icelandic elves.

“In Iceland, there is still a belief in elves, and I’m looking at where that comes from,” says Burrell. “My main study interest is Old Norse language, as well as literature, and the Álfar are part of Old Norse mythology.” Her paper, Álfar and the Early Icelandic Settlers, is an ideal match for the Estonian conference’s theme of “Supernatural Places.”

“I’m looking at it on more of an analytical level,” she explains. “I’m tying the elves to how the Icelanders approached the landscape when they first arrived. Was it the very dramatic landscape that influenced the Old Norse settlers to create new ideas about the elves, or did they make the environment mystical and supernatural because they already had these ideas about elves and trolls and other beings? It’s the same as looking at Odin or Thor and their functions in society; I’m just looking at elves.” 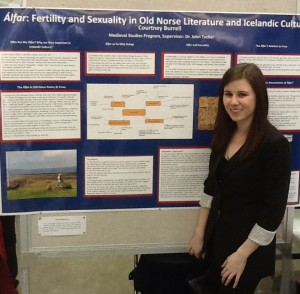 Burrell presenting her findings at UVic

But we’re not talking about Santa’s little helpers here; think more along the lines of The Lord of the Rings. “J.R.R. Tolkien’s representation of elves—especially in The Similarion—is very close to what we actually have that talks about elves,” says Burrell, referring to Old Norse Eddic poetry and the Prose Edda, a compilation of Old Norse myths by 13th century Icelandic historian and poet Snorri Sturluson. “What little there is written about Icelandic elves matches Tolkien’s description: they’re smiths, they’re beautiful, they shine like the light, they’re warriors . . . of course, Tolkien knew Old Icelandic and was a major scholar in that field.”

While this will be Burrell’s first time presenting at an overseas academic conference, she has spent time living and studying in Denmark—where she first got interested in Old Norse culture (“Old Norse is a broad term for the Viking culture that came to Iceland,” she adds)—and plans to pursue a Masters degree in Nordic Philology in Germany.

More than just studying mythology, however, Burrell has a passion for preserving the past. “It’s not just the history and the stories,” she insists. “I believe it’s really important to keep those languages alive. As science and technology become more important, I hope universities and high schools don’t lose that focus of teaching history and literature.”

Note: this piece originally appeared in June 2012 convocation issue of The Ring.