The city’s visual arts scene became even more inclusive with the March 8 news that Lindsay Delaronde has been named Victoria’s inaugural Indigenous Artist in Residence. 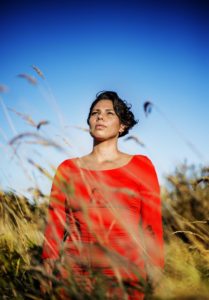 Delaronde, an Iroquois Mohawk woman born and raised on the Kahnawake reservation outside of Montreal, is also a multi‐disciplinary Visual Arts MFA alumna (2010) and has been a professional practicing artist for the past five years. In 2015, she was one of three artists-in-residence at the Royal BC Museum (along with fellow Visual Arts alumnus Gareth Gaudin); her work was in the spotlight with her 2016-17 exhibit In Defiance at UVic’s Legacy Gallery, and she was also a featured speaker at UVic’s Diversity Research Forum in January 2017.

Delaronde began making art at a young age, practicing traditional forms of art making such as beadwork and cultural crafts. She began her journey to become a professional artist by travelling to the West Coast and obtaining her BFA at the Emily Carr Institute of Art & Design.

She creates work directly related to being an Indigenous woman in contemporary mainstream society, and has worked in mediums ranging from printmaking (including silkscreen printing and photos transfers) to painting, drawing and video — all with the motivation to expand the evolution of Indigenous peoples and their histories. Her intention is to construct Indigenous perspectives within Western society to bring forth truth and reconciliation through the act of creation and visual understanding.

For her one-year term as Indigenous Artist in Residence, Delaronde will work with the community and City staff to produce a range of artistic works; she will also have an opportunity to create collaborative artwork with the City’s Artist in Residence, Luke Ramsey, who was appointed in fall 2016. She will work 20 hours per week as an independent contractor (March 2017 to March 2018) for a total fee of $42,000, funded by the City’s Art in Public Places Reserve Fund. Artwork materials, fabrication and installation may be funded by a capital project’s budget, with up to $30,000 from the Art in Public Places Reserve Fund. 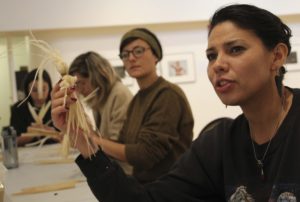 “My goal and my purpose for the residency is really to pave the way for young emerging indigenous artists and youth, and help them understand that anything is possible,” Delaronde said in this Victoria News interview.  “Everyone can stop and take a look at how art has helped them in their lives or how creativity has help someone through something or see something differently or be inspired by art . . . We all have these experiences so one thing that’s important is really helping people to personalize their own relationship to artwork and artwork in the city and what that means.”

One of six artists who applied for the position — which was open to First Nations, Inuit and Métis artists and artist teams working in any artistic discipline who reside in the Capital Region, including the Gulf Islands — submissions were evaluated based on artistic excellence, written interest, and knowledge and understanding of the cultural heritage and legacy of the area. Experience with community engagement and a desire to create artwork for and in the public realm were required.

’Namgis nation chief Rande Cook — a member of the City’s Art in Public Places Committee, and the current Audain Professor of Contemporary Art Practice of the Pacific Northwest for the department of Visual Arts — feels Delaronde is a good fit for what the City of Victoria has declared the Year of Reconciliation. “At a time where love, respect, unity and art come together, let’s all follow in the path as Lindsay paints and creates towards a brighter future,” he says. “Reconciliation is an act we as people must feel from within before we can dance unified to the heart of Mother Earth.” 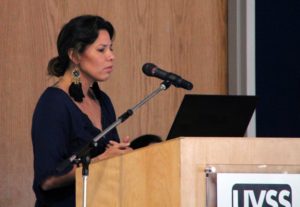 Delaronde also recently completed her second Master’s degree at UVic, in Indigenous Communities Counselling Psychology. As she recounted in this Focus magazine interview, having experienced domestic violence and trauma in her youth, Delaronde has always turned to art-making for solace; realizing how an art practice helped her in her own healing, she has been finding points of cohesion. “As time went on, I was really interested in narrative therapy, person-centred therapy . . .  We don’t heal in isolation. Our worldview is about coming together and doing ceremonies so we could be visible; we could be seen. We could be part of community. The individual healing is the group healing—one is the other.”

She is already planning a multidisciplinary performative piece, titled A CHoRD, to take place at Victoria’s Legislature on June 25, 2017. Co-created with local choreographer Monique Salez  to enact a new accord reflecting the potential for a rallying point between cultures, politics, ages, and herstories, A CHoRD will “appropriate the colonial legislative system to dismantle existing hypocrisies and injustices while proposing new partnerships with an eye toward the potential for a contemporary and inclusive recreation where women’s voices, bodies and politics are reclaimed.” 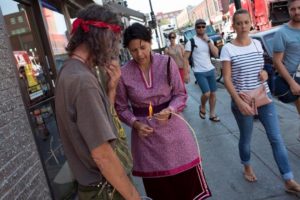 Want to get involved? Performers and activated audience members are needed, and you can find out more at an informational meet & greet, 3 to 5pm Sunday, March 19, at Raino Dance, 715 Yates (3rd floor).

You can also see footage of Delaronde’s 2015 Unceded Voices interactive street art performance piece here. “I dressed Iroquois regalia approaching local Montrealers and asking if they knew what First Nations territory they were on?” she said at the time. “What do they know of Kahnawake and Mohawk people? Interesting and upsetting responses in relation the lack of knowledge people have. So I did an acknowledgment of territory and educated them on who we are as Onkwehonwe people.”

We’ll  be excited to see the impact — both immediate and long-term — this extraordinary Fine Arts graduate has on Victoria during her year of residency.