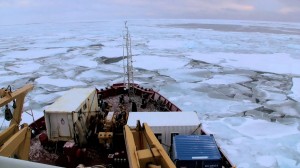 A naked woman wandering through the McPherson Library, a couple’s last moments together hiding from a killer, poetic ruminations on life and nature, the woes of undergrad dating and an incredible balancing dog—those were just a handful of creative entries in the seventh annual Sunscreen Student Film Festival.

Over a hundred people gathered to see the winners at Sunscreen’s high-spirited screening night at the David Lam Auditorium on April 7, which kicked off with a tribute to and fond farewell by beloved veteran film prof Brian Hendricks, retiring after 20 years with the Department of Writing. (“12,000 students, 1,500 films lectured on, 180 courses taught . . . you start feeling like you’re living at the gift shop at the airport, where everyone’s leaving and you’re not going anywhere,” quipped Hendricks.) With almost 50 entries, this year’s jury—documentary filmmaker Peter Campbell, May Street Productions vice-president Sandy Mayzell and Times Colonist film writer Michael D. Reid—had to thin the pack to 20 finalists, of which six were selected as the ultimate winners.

With past Sunscreen champs having seen their work screened at various local and national film festivals, Sunscreen creator and Department of Writing film prof Maureen Bradley stresses the importance of having a professional jury for the process. “Grades don’t mean anything when you’re out getting a job or trying to get a grant or get attention in the media for your work, but screenings, awards—that’s the real currency,” she says. “That’s why it’s important to have a community and professional component to it. The juries and prizes are all local industry or community contacts—memberships with MediaNet and CineVic, for example—so we create a lot of strong relationships there. [Writing graduate student] Scott Amos is a good example, actually—he won Best Experimental Film his first year here, and now he’s president of the board at MediaNet.”

And while Sunscreen is helmed by the Department of Writing, Bradley is quick to point out it’s a campus-wide festival. “There’s always a fair bit of Fine Arts content, of course—mainly Writing and Visual Art students—but some of the most interesting pieces have come out of the Sciences,” she says. “And I think the new Creativity 101 class, Creative Being, will spark a lot more general content in the future. It’s so different today from when I was a student; it used to be so hard to get your hands on a film or video camera, but now it’s just ubiquitous, so it’s more about quality.”

But don’t think having a camera in your phone is all that’s needed to make a good film. “Digital technology was supposed to revolutionize filmmaking and I’m not sure it has,” muses Bradley. “Yes, it revolutionized access, and made millions and millions of hours of content available online, but how much of that is worth watching? What we’re trying to do with Sunscreen is highlight students who’ve learned two key things: how to tell a good story or promote a compelling concept, and how to match the aesthetic to the story—or vice-versa. A lot of these students have been raised on YouTube, but it’s important to show them there are other ways to do film than just defaulting to that YouTube aesthetic.”

That said, what makes for a great Sunscreen entry? “The winning films stand out because they’re usually really short and make their point quickly,” says Bradley, who has been programming short-film programs since 1992. “We get a lot of Tarrantino-esque film noir, but dramas are a hard sell, because you need good acting and it’s really hard to direct good drama, and there’s often a couple of comedies—but again, comedy is hard to do well. My philosophy is long short-film programs are painful; it’s better to have 70 minutes of really good content than 90 minutes of pretty good content.”

And while we can’t post this year’s winners online yet (it could disqualify them from entering other film fests), here’s some links to previous Sunscreen winners: