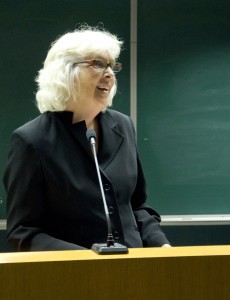 Will it be second-time lucky for Joan MacLeod? The acclaimed Canadian creator of such much-loved plays as Homechild, The Shape of A Girl and Amigo’s Blue Guitar is once again in the running for the $100,000 Elinore & Lou Siminovitch Prize, the largest theatre award in Canada. MacLeod, also the acting chair of UVic’s celebrated Department of Writing, was previously shortlisted for the prize in 2005.

Rounding out this year’s shortlist are Robert Chafe of St. John’s, Newfoundland, Montreal’s Larry Tremblay, Toronto’s Greg MacArthur, Saskatoon’s Mansel Robinson and Quebec’s Jasmine Dube, selected from a list of 23 nominated playwrights. The Siminovitch Prize recognizes accomplishments in design, direction and playwriting in three-year cycles, and this year’s focus is on playwriting. Past winning playwrights include Montreal’s Carole Frechette, Toronto’s John Mighton and Daniel McIvor, also of Toronto, who presented the world premiere of a new play, Inside, at UVic’s Phoenix Theatre earlier in 2011.

“The jury was thrilled with the range and quality of the work of all the playwrights nominated this year,” jury chair Maureen Labonte told the Globe and Mail. “The finalists demonstrate passion and imagination in their writing, as well as extraordinary voice and vision, all of which contribute to building a strong Canadian theatre scene.”

The Siminovitch prize was created in 2001 in honour of scientist Lou Siminovitch and his late wife Elinore. The winner will be announced on Nov. 7 at a ceremony in Toronto.