History in Art and MEICON-BC

In 2008 UVic, SFU and UBC started a collaborative project called MEICON-BC: The Middle East and Islamic Consortium of British Columbia. 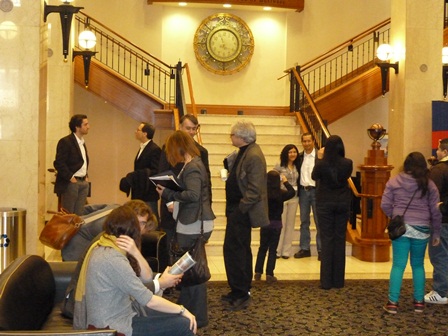 The contribution of UVic was natural since the university has a very strong presence in Middle Eastern and Islamic Studies in Canada, including, uniquely, two dedicated positions in Islamic Art (Drs Marcus Milwright and Anthony Welch). The areas of specialization of UVic scholars range from Islamic art, history, philosophy, and sociology to political science, history of religion and science.

The purpose of MEICON-BC was to bring together British Columbia-based academics who are interested in the study of the Middle East and Muslim cultures. The events organized by MEICON are helping to promote understanding of these cultures in the community.

MEICON has sponsored dozens of lectures and film viewings, while special discussion forums have addressed contemporary issues such as the political changes in the Middle East. Events are often sponsored by SFU’s Centre for the Comparative Study of Muslim Societies and Cultures (CCSMSC) and UVic’s Centre for Studies in Religion and Society.   Presenters have included Tariq Ramadan (Oxford), George Saliba (Columbia), and Laura Marks (SFU) among many international scholars, journalists and political analysts.

MEICON has also built a successful, rotating annual student conference with participation by both graduate and undergraduate students. The conference has proved a fertile platform for the presentation of the work of young scholars who have talked about politics, issues of gender, textual criticism, material culture, diasporas, and much more. The best papers of the 2010 conference were published at a special edition of Illumine, the graduate journal of CSRS, edited by Mona Goode, PhD candidate in History. Last March, Gwen Donaldson, a fourth-year student in History in Art presented her original research on inscriptions on medieval Samanid ceramics from Iran and Uzbekistan at the fourth Annual Conference.

The 5th Annual conference will be organized at UVic. The conference is accompanied by a faculty symposium on the theme of “Canada’s Contribution to Middle Eastern and Islamic Studies” (March 22-23, 2013).

The project has done much to promote communication among academics based in BC, but it has also promoted dialogue and collaboration among UVic faculty in very different disciplines.

Visit MEICON-BC for more information and news about the upcoming conference.