Hot on the heels of their critically acclaimed (and commercially successful) 2014-15 season, Phoenix Theatre recently announced their lineup for next year. A mix of new work, old classics and rarely seen gems, the 2015-16 season is looking like another great year.

“Theatre has a way of reminding us what it means to be human,” says Theatre department chair Allana Lindgren. “At the heart of the Phoenix Theatre’s 2015/16 season are four plays that share compelling human stories, and with master playwrights like Bertolt Brecht, Anton Chekhov and Tennessee Williams in this list, I know you’ll love the plays we’ve chosen for next season.” Here’s what’s coming up: 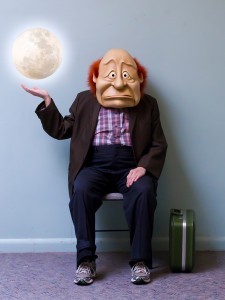 Opening the season with their traditional Spotlight on Alumni, Phoenix alumna Kate Braidwood returns to campus with her performance partner Andrew Phoenix and their widely acclaimed WONDERHEADS company. They’ll be presenting the wordless and whimsical Loon (October 14-24), a beautifully surprising mix of physical theatre, comedy and pathos and a love story the likes of which you’ve never seen. CBC enthusiastically described Loon as “a live cartoon for lovers and for dreamers; that is, for everyone. I’d give it more than five stars—I’d give it the moon.”

Loon centers on Francis, a lonely janitor who is plagued by isolation and tickled by whispers of childhood imagination. He has hit rock bottom and discovers that he has nowhere to go . . . but up. And up. And up! But will plucking the moon from the sky bring him the love he is searching for? The Portland-based WONDERHEADS have been hits with every show they’ve brought to town (including Fringe Fest favourites Grim & Fischer and The Middle of Everywhere) and it’ll be a pleasure to see Braidwood back at the Phoenix in the Spotlight on Alumni. 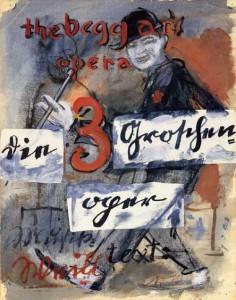 A German poster for The Threepenny Opera circa 1928

Up next is Bertolt Brecht’s classic The Threepenny Opera (November 5-21), featuring the music of Kurt Weill—possibly best known for bringing the jazz standard “Mack the Knife” into the world. Directed by Theatre professor Brian Richmond, The Threepenny Opera borrows from the 18th-century The Beggar’s Opera and offers an edgy mix of biting satire and sheer theatrical innovation as it takes aim at the traditional bourgeoisie and reveals a society where law is fickle, money corrupts and crime absolutely pays.

“This is quite possibly the most important piece of musical theatre in the 20th century,” says Richmond, who will be working with Applied Theatre professor Kirsten Sadeghi-Yekta to bring a strong sense of realism to this production. Richmond is well-known for breathing fresh life into classic works, as evidenced by past Phoenix productions like Guys & Dolls, Dark of the Moon, The Wind in the Willows and Romeo & Juliet.

Moving into 2016, we have Michael Frayn’s Wild Honey (February 11-20). Directed by Theatre professor and Phoenix alumnus Peter McGuire, and adapted from an original play by Anton Chekhov, Wild Honey offers a charming and hilarious love triangle set on a hot summer day on a provincial country estate, where friends, neighbours and family all get caught up in an elaborate game of romantic cat-and-mouse.

“Shakespeare said, ‘what fools these mortals be’ and I want to celebrate that sense of foolishness,” says McGuire, noting that Wild Honey is a lot like “a Woody Allen film—it shows us lives filled with love, sex and intrigue, all with a strong element of farce.”  McGuire also plans to take a decidedly non-traditional approach to the production, with the design mixing old and new, classic and modern—all to a jazzy, klezmeriffic music score. Curiously, Wild Honey is based on Chekhov’s first ever play, which was then sealed in a bank vault until after his death. 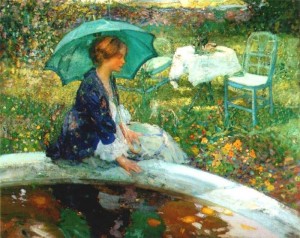 Finally, Phoenix ends its season with Tennessee Williams’ Summer and Smoke, as directed by MFA candidate Alan Brodie (March 10-19). Set in Mississippi at the turn of the 20th century, Summer and Smoke sees Tennessee Williams at his most passionate as he gives us the tale of Alma—the daughter of a small-town minister and mentally unstable mother, who harbours a life-long infatuation with her restless and self-indulgent neighbour, John. Of course, Alma and John’s struggle—between body and soul, anarchy and order, love and lust—leads to profound changes in both their lives.

“As a designer, I’ve done plenty of shows but hardly any from the modern American milieu,” says director Brodie. “I’ve always been drawn to early 20th century playwrights like Williams, who emphasize story, character and psychology. This is essentially a love story, just one without a happy ending.” (Better get out your handkerchiefs for this one.)

A bittersweet exploration of love and longing, Summer and Smoke is a true American masterpiece with unforgettable characters that break our hearts even as they touch our souls.

Click here for ticket information, and subscriptions for the 2015-16 season are already on sale here.