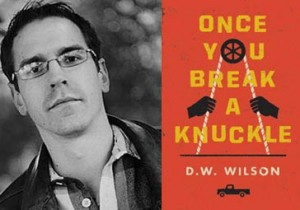 Two bits of Writing grad news to kick off the week: rising literary star D.W. Wilson has made the top-10 English-language shortlist in the 2012 Canada Writes CBC Short Story Contest for his story, “One More Thing Coming Undone.”

The recipient of the University of East Anglia’s inaugural Man Booker Prize Scholarship (an honour picked up in 2011 by Writing grad Eliza Robertson), Wilson made headlines last year when it was announced that his story, “The Dead Roads” had won the BBC National Short Story Award—which, at £15,000 (about $24,000), is the second richest short-story prize in the world. Wilson’s debut collection of short stories, Once You Break a Knuckle, was also voted one of the Best Books of 2011 by the National Post.

Wilson’s “One More Thing Coming Undone” will be posted—along with all the other shortlisted stories—on the CBC Short Story Contest website, where you can read and then vote for it starting March 19. Winners announced March 26, and the first prize winner will receive $6,000 from the Canada Council for the Arts, publication in Air Canada’s enRoute magazine, a two-week writing residency at of The Banff Centre in Alberta, and be interviewed on CBC Radio One’s The Next Chapter with Shelagh Rogers. Go Dave! 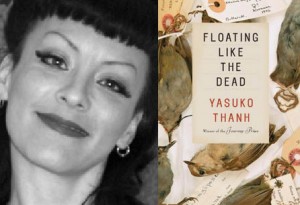 Meanwhile, fellow Writing grad Yasuko Thanh—who won the 2009 $10,000 Journey Prize for the short story “Floating like the Dead“, a fictional account of the D’Arcy Island leper colony—is now the subject of a song.

Her husband has written the jaunty little rockabilly ditty, “Suko Wrote A Book”, to celebrate the forthcoming April 3 launch of new book, Floating Like the Dead (published by McClelland & Stewart). You can give it a listen here.