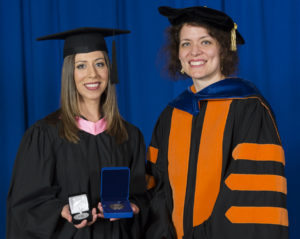 Each year, the Victoria Medal is awarded to the student with the highest GPA in the Faculty of Fine Arts. Similarly, the Governor General’s Silver Medal is awarded annually to UVic’s top undergraduate student—but it’s a rare day indeed when both awards are given out to the same student.

But such was the case this year when School of Music undergraduate Kelsey Wheatley was presented with both medals as part of the Fine Arts convocation on June 18. An exceptional student by any measure, Wheatley is a vocal performance major who didn’t let her dedication to her studies get in the way of being actively involved in the arts in the community—notably with Pacific Opera Victoria, where her appearance as the Ravenswood Ghost in their 2015 production of Lucia di Lammermoor earned ovations from audiences, classmates and professors alike.

“Kelsey has been the kind of student teachers wish for—not just in her talent and work ethic, but also in her perseverance and her hunger to improve,” notes music performance instructor Anne Grimm. “She has not only been a very keen and motivated student in voice but has shown achievement overall in all her courses. I’m thrilled for her that she receives these awards and am sure that she will use them to her advantage and be inspired by it.”

Described by Grimm as a “hardworking, eager student who doesn’t shy away from the typical challenges that studying voice and music present,” Wheatley also stood out for both her vocal and musical instinct and stage presence. An engaging performer, her instructors also noted that she has “perseverance, strength, determination, a consistent work ethic and a real love for singing”— all of which are crucial to make it in the competitive music world.

Originally from Prince George, Wheatley was a transfer student who came to the School of Music via the two-year integrated music program at Camosun College and Victoria Conservatory of Music, as she specifically wanted to study with UVic vocal instructors Anne Grimm and Benjamin Butterfield. “The vocal performance program had many performing opportunities like the concerto competition, so it was an easy decision having everything I wanted in a program,” she says. “I also felt inspired being on campus, with the natural surroundings and the positive energy of the students.” 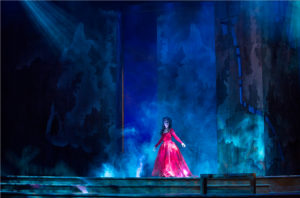 On top of music theory professor Harald Krebs (“he was an example of how a teacher’s passion for a subject can impact his students and inspire them to achieve more than they thought they could”), Wheatley singles out Anne Grimm as being particularly influential. “She taught me to have patience in my developing craft, yet to never stop putting in the hard, detail-oriented work that needs to be done in order to be the best I could be. She never stopped believing in me even when I had my own doubts.”

Wheatley also valued the “priceless” hands-on experience and career boost that came with getting out of the classroom and into Victoria’s arts community. “Working for Pacific Opera Victoria as a part of the chorus helped me to fully grasp what kind of career I was getting into,” she says. “I absolutely adored being involved in POV’s productions, which proved to fuel the fire of my studies because I wanted to be as successful as the professionals I was working so close to.”

Other highlights of her academic work include the opportunity to direct a small children’s choir at First Metropolitan United Church (“I learned as much from the children as they did from me . . . watching them practice, and present vocal pieces was truly rewarding”) and winning the annual School of Music Concerto Competition.

As for achieving an outstanding 9.0 GPA, Wheatley says it was due to “doing my best not to procrastinate, planning my days and setting deadlines for goals. I also achieved it by completely loving the process and being passionate about what I do.” 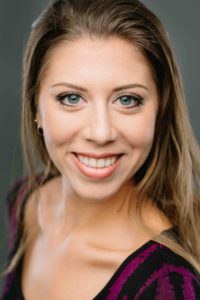 When asked what makes the difference between a good student and a great student, Wheatley says it’s all about vision. “A great student finds a way to connect what they are studying in the present to where they are heading in the future,” she says. “They get involved in their classes and keep an open line of communication with their classmates and with their professors.” On a practical level, she suggests studying with others and creating games out of study materials.

And is there a secret to becoming UVic’s top undergraduate student? “I really don’t think so . . . I had the pleasure of working with so many wonderfully talented and hardworking students during my time at Uvic. It truly could have been any one of us.  I just happened to completely adore the courses I took, along with the amazing professors who taught them, so much so that the hard work didn’t seem like hard work. I just do what I do and never stop trying to be better. It sounds cliché, but it’s the truth.”

Future plans include taking a year off to hone her craft, find “a balance in life without the pressures of school,” and apply for emerging artist programs and graduate programs for 2017. “The best part of graduation is having the freedom to go anywhere and do anything,” she says.

Finally, if she could offer one piece of advice to future students, what would it be? “That thing that you love in your life, that you can’t live without? No matter what it is, as long as you live, love and breathe it, you can’t go wrong.”