From the frozen lands of the High Arctic to the scorching streets of Liberia, filmmaker Judith Pyke has never shied away from diverse and challenging locations. Currently the 2018 Southam Lecturer in Journalism and Nonfiction for UVic’s Writing department, the award-winning documentarian will be sharing her insights and experiences at the annual free Southam public lecture. “Discovering Documentary: A Filmmaker’s Journey Through the Foundational Aspects of Documentary-Making” begins at 7pm Thursday, April 5, in room A240 of UVic’s Human & Social Development Building. 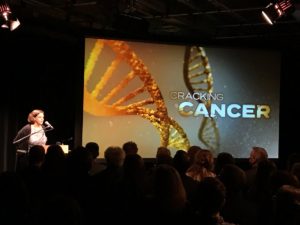 Judith Pyke will offer behind-the-scenes insight into her documentaries, like “Cracking Cancer”

“Filmmaking is my passion so I am always excited about it,” Pyke told the Oak Bay News in this April 2 article. “I’m always challenging myself to tell the best story possible.”

As a writer, director, executive producer and showrunner, Pyke has traveled the world to interview people ranging from top scientists and international figures to village locals and renowned artists like Lou Reed, Philip Glass and Stephen King. “Documentaries are a great way to engage with the world and tell stories,” she says. “The public has really fallen in love with the form.”

Listen to a live interview with Judith Pyke on CBC Radio’s On The Island at 7:20am on Thursday, April 5.

Her talk will focus on her two most recent films: Inseparable and Cracking Cancer. Inseparable focuses on a set of conjoined 10-year-old twin girls in Vernon, BC; made for CBC Docs through her own company, Curious Features, Inseparable recently won a Remi Award at the 51st Annual Worldfest-Houston International Film Festival, and has also been nominated for a Golden Sheaf Award in the “Documentary History and Biography” category at the Yorkton Film Festival. Pyke’s 2017 documentary Cracking Cancer, which she wrote and directed for Dreamfilm Productions, was recently nominated for best direction at the Canadian Screen Awards.

But as the Vancouver-based writer-director will share in “Discovering Documentary: A Filmmaker’s Journey Through the Foundational Aspects of Documentary-Making,” her interest in the form goes back to her own days as a UVic undergrad taking writing classes in the early ’90s.

“As soon as I started at UVic, I knew I wanted to be a documentary filmmaker, but there were no filmmaking courses then,” she says. “But even though I’m a visual storyteller, I’m in love with the written word—I’m a writer and a director, which use different parts of your storytelling brain.” 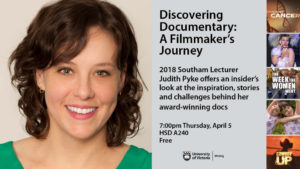 As the Southam Lecturer, Pyke’s class of 50 students have been learning from her 20 years of filmmaking experience, but her April 5 public talk will offer a rare behind-the-scenes glimpse into her award-winning creative process. “I loved going to UVic, so it is really great to be back as an instructor,” Pyke told the Oak Bay News. “I’m basically teaching the course that I really wanted to take when I was there.”

As the 11th person to hold this prestigious journalist-in-residence program, Pyke is currently teaching a course on documentary film and television for UVic’s Writing department. She joins a list of fellow Southam Lecturers that includes broadcaster Jo-Ann Roberts, late Indigenous author Richard Wagamese, immersive journalist Terry Glavin, and many others.

The Southam Lecturer in Journalism and Nonfiction was established in 2006 and is made possible by a significant gift from one of the country’s leading publishing families.

“Discovering Documentary: A Filmmaker’s Journey Through the Foundational Aspects of Documentary-Making” begins at 7pm Thursday, April 5, in room A240 of UVic’s Human & Social Development Building.