Back in 2001, Charles Ross wrote his own ticket to travel the world. Since then, he has created two more — he just calls them blockbuster one-man shows. 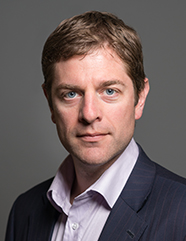 Charles Ross, one man who does it all

A hilarious homage to the original three Lucasfilm movies, Ross’ One-Man Star Wars Trilogy has been performed on almost every continent around the globe — including London’s West End, New York City’s Off-Broadway and Australia’s Sydney Opera House. Ross has even performed for George Lucas himself at a Lucasfilm Star Wars convention. Fresh back from an 18-city UK tour (including a month-long run at the famous Edinburgh Fringe), Ross is one of three artists invited to perform at the Phoenix Theatre’s 50th Anniversary Alumni Festival.

While Ross says it’s an honour to be asked to perform back at the Phoenix, he laughs that he almost didn’t get into the theatre program. In this recent interview with the Times Colonist he explains how he moved from Nelson to Victoria before learning that the program was already full. “I was devastated,” he said — so devastated that he went to the department to plead his case.  “Yes, I’m going to make an ass of myself. But I’m going to do it anyway…. I told them: ‘Oh God please, if something comes up, can you give me a bit more consideration? I’m an idiot. I’ve already moved down here.’”  After a “completely bummed out” summer on the wait list, he learned only two weeks before classes that he was accepted. 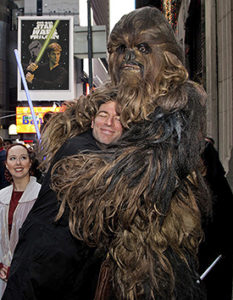 Ross and a rather shaggy fan

Ross will perform his one-man trilogy of trilogies from October 11-17 at the Phoenix: Lord of the Rings (Oct. 11-13), Star Wars Trilogy (Oct. 14 -15), and Dark Knight: A Batman Parody (Oct. 16-17). Get tickets here. While on campus, he’ll also be talking to the next generation of Theatre students via workshops and classroom visits.

The origin story of the One-Man Star Wars Trilogy also has ties to the Theatre department. Ross was playing Frisbee with then-classmate TJ Dawe (who will also be part of the Alumni Festival) when the idea of reenacting the Star Wars movies was proposed. Both had a love for the original three movies; they sat down to write the play and soon began rehearsing it, with Dawe directing.

Over the past 15 years, the play has only improved, thanks to Ross’ lightning-fast character changes. With a quick turn or a side-step, he slips easily from the voices of Luke and Princess Leia, to Yoda, Chewbacca or the animated beeps of R2D2. Throw in all the sound effects — which he creates himself — and suddenly the stage transforms into a galaxy far, far away. “To my mind, there was nothing more absurd than seeing a man on stage wearing black clothing trying to be everything out of Star Wars. It’s like watching an eight-year-old child, except it’s a fully grown man,” said Ross when interviewed by the UK news site BigIssue.com. 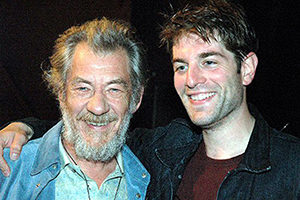 Two years later he started on his next challenge, one that he still finds his most exhausting show to perform — the One-Man Lord of the Rings Trilogy. This play follows the original JRR Tolkien books with Frodo Baggins and friends as they carry the one ring across Middle-earth to confront orcs, goblins, wraiths, and Sauron’s other forces of evil. “The hardest part is falling a lot on my arms, shoulders and knees,” Ross told BigIssue. “Lord of the Rings has a lot more falling and a lot more brutal, violent death, creatures and orcs, and it’s very fast.” The show also led to Ross meeting Sir Ian McKellen in person.

Most recently Ross has channeled his love of superheroes into his newest one-man show, the One-Man Dark Knight: A Batman Parody. Again working with TJ Dawe as a director, Ross also consulted with another Phoenix alumni who is a Batman aficionado, Ian Case (currently the Director of UVic’s Farquhar Auditorium). The play follows the major plot developments across Christopher Nolan’s trilogy of movies, Batman Begins, The Dark Knight and The Dark Knight Rises.

“Today, being a nerd is a good thing,” says Ross.

Coming up next at the Alumni Festival:

• TJ Dawe‘s The Slipknot (October 18-22) is a coming-of-age tale about working in lousy jobs. Hysterical yet heartbreaking, he shares his observations and life’s lessons from his experiences. The acclaimed writer/director/actor regularly performs his 14 autobiographical solo shows around the world, and his play Toothpaste & Cigars (written with theatre alumnus Mike Rinaldi), inspired the Daniel Radcliffe movie The F Word.

• Shannan Calcutt‘s Burnt Tongue (October 25-29) see this Cirque du Soleil artist take a break from Las Vegas’ Zumanity as she brings her alter-ego clown, Izzy, back to the Phoenix in this quirky solo show about a clown who’s eager to find love — so eager she shows up to her first blind date wearing a wedding dress!