A Force to be reckoned with 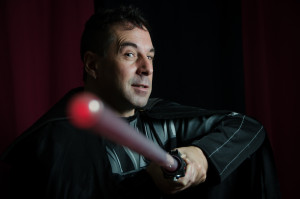 The force is definitely with Fine Arts PhD candidate David Christopher. One might even say it is his destiny. And when Star Wars: Episode VII – The Force Awakens hits theatres next month, you can count on Christopher, a cinema and cultural theory instructor with the Department of Art History & Visual Studies, to be in line for the new movie.

Not only is he developing a course on Star Wars, but he also played the role of Darth Vader at his own Star Wars-themed wedding. And, when he was just seven, Christopher took in the very first movie from the back of his best friend’s family’s wood-paneled station wagon at an Ottawa drive-in in 1977.

Christopher points out that “Star Wars resonates on so many pop culture, individual and theoretical levels. We see it as a historical pivot point where the balance between spectacle and narrative in Hollywood begins to shift. This is the time where the privileging of spectacle really began and narrative took a secondary back seat.” 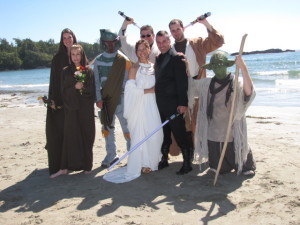 “Star Wars gives you a wide berth of highly popular, highly populist films with which to measure the ideological temperature of American popular culture over the 40 years surrounding 9/11,” he continues. “Star Wars is certainly a significant artifact in the evolution from modernism to post-modernism. It hit so many of the right points at the right moment.”

Media interest in Christopher’s Star Wars passion has been high, resulting in interviews with the likes of The Province newspaper, Vancouver’s Metro News, and both CBC Radio and Television (not archived online). He also appeared on CHEK TV, Global TV, Vancouver radio stations Spice and CKNW, and UVic’s own student newspaper, Martlet.

Whether it’s the mythological, sociological, psychological, theoretical or economical impact of the original trilogy, Christopher is well-versed in all things Star Wars. “It not only changed how movies were made but it changed how people talked about movies. People had a field day with this series for decades.” 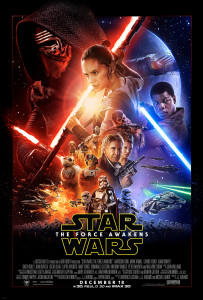 “I don’t think anyone—certainly not George Lucas—expected it to be what it became,” he adds. “It changed Lucas from an incidentally brilliant filmmaker into a corporation. When he later made the prequel trilogy, a lot of critics recognized he had exhausted his creative energy in 20 years of corporate leadership.”

Christopher has a paper in peer review for publication, on the allegorical function of the prequel trilogy; has spoken about the cultural significance of Star Wars for the UVic Speaker’s Bureau; and his new Star Wars course will “look at the tectonic shift in cinematic practices it instigated and the discursive zeitgeist around its iconic status within popular culture.”

In addition to master degrees in cinema & cultural theory and theatre history from UVic, Christopher holds degrees in English and economics from Carleton University and was recently published in the Canadian cinema journal CineAction, the Online Journal of Arts and Humanities and in the Theatre Notebook (UK).

Christopher also recently composed a formal analysis of the three-minute teaser trailer for Episode VII. It was substantially longer than the trailer itself. 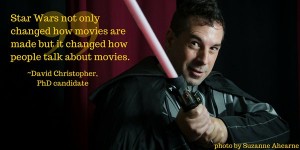 And he has what he describes as “a Star Wars commodity collection,” carefully encased behind glass.

Just like Yoda said: “Do. Or do not. There is no try.” For Christopher, he’s done it all for the iconic classic.