Learning from a Legend 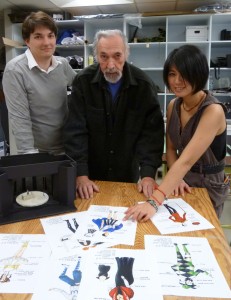 Can you imagine getting the chance to work with a legendary Shakespearean master? This was the opportunity offered to more than a dozen talented actors, designers and aspiring directors at the Department of Theatre when the illustrious playwright, director and critic Charles Marowitz came to UVic this spring to direct his reinterpreted version of Hamlet that will be performed at the Phoenix Theatre, running March 15–24.

An elder gentleman of the world of theatre, Marowitz has worked at the revered Royal Shakespeare Company in London’s famous West End, directed hit plays on Broadway and written for most of the leading theatre media including the London Times, New York Times, Theater Week and American Theatre.

He has also, somewhat notoriously, reinterpreted almost a dozen Shakespeare plays over his celebrated career. Viewing them as “collages” of the original, he uses the same poetic language as Shakespeare, but rearranges the lines and scenes, sometimes attributing lines to different characters. What emerges is a contrasting view of the characters’ motivations and a new perspective on the play’s meaning.

For students involved with the UVic presentation of The Marowitz Hamlet, it was a unique chance to glean insightful information from his vast experience. “Because it was his play that he had directed so many times, he understood the motivations of each character so clearly and was able to express the difference from Shakespeare’s original and this play to the actors,” says Mika Laulainen, a fourth-year student and assistant director. “I could see how well the actors responded to his depth of knowledge about their characters.”

The two met regularly to discuss the progress in rehearsals, however sometimes conversations wandered and revealed great stories from his past. “He told me about his first directing gig in New York where, straight out of high school, he walked in to an Off-Broadway theatre and asked them to let him direct a show—and they did! It’s amazing how times have changed.” 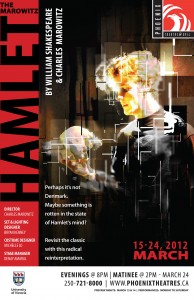 Michelle Lo, fourth-year student and costume designer for the play, also received the benefit of his clear ideas. “He allowed me to explore ways to have fun with his characters, to make them more ‘theatrical’, while still encompassing the direction he wanted. He’s a very interesting person. Sometimes he could come across as quite serious, but then his wry humour would randomly surface and he’d spontaneously say something hilarious.”

Preparation for the set design necessarily begins almost a year in advance. For MFA candidate Bryan Kenney, this meant the opportunity to visit Marowitz at his Malibu home to discuss their ideas. “It was interesting. He showed me a lot of examples of his past productions, and I was able to understand the minimalist aesthetic he is interested in. We talked about ways of making the vast space of our proscenium theatre a more intimate experience for the audience.”

Leaving California with a basic concept, Bryan communicated by phone, mail and email to finalize the design. After Marowitz arrived in Victoria, the conversations continued in more detail. “We had some really insightful discussions about how the actors could best use the set to get his story across. He was very open to my ideas in the rehearsal process.”

And what does the Shakespearean master feel about his experience working with students? “Refreshing!” says Charles Marowitz. “There’s a clean slate with young students. They avoid clichés and haven’t developed any bad habits. Professionals tend to draw from their experience, recycling and distilling actions or ideas from other productions, other experiences. There’s a freshness to working with young people that I think is healthy for a director.”

In the end, Marowitz was pleased with the cohesion between his “more traditional director’s vision” and the new ideas of the students. “The kick is working with kids that are really smart to produce something that, while exactly what the director wants, is an ‘entente’ between the two.”
—Adrienne Holierhoek