What kind of visual art, objects and buildings are associated with Jewish culture? How and when did synagogues appear? What does art tell us about the daily life of the Jews? How was Judaism in turn received, reflected or rejected in the other artistic traditions of antiquity and the medieval period? These questions and more will be addressed in Canada’s first university course looking specifically at Jewish Art. 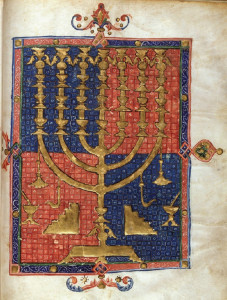 Menorah, the Duke of Sussex Catalan Bible (circa 1380)

Jewish Art: Ancient and Medieval (HA 324) is an elective course created by History in Art associate professor Eva Baboula. As the name suggests, the course will focus on Jewish art of the ancient to late medieval periods; and, as an elective, it is open to any UVic student.

“I’ve been incorporating material on the life and art of Jewish communities in several of the courses I’ve been teaching and I think the time is ripe to treat the topic on its own,” says Baboula. “It will be a first for Canada, since there are no other such courses around.”

It was while she was attending the annual Conference for Canadian Medieval Art Historians that Baboula heard a talk by University of Toronto professor Adam Cohen, urging university art historians to include the occasional image of Jewish art in medieval art courses. (eg: a page from an illustrated manuscript). “I told him I was planning a whole course on it and he was enthusiastic,” she recalls. “It will be a challenging first time, but I hope it works well.” 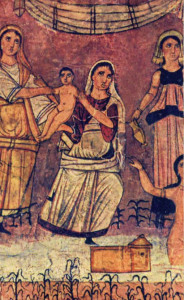 Moses in the river, Dura Europos (circa 250)

Baboula’s course will include much about the actual images the Jews of Europe and the Mediterranean created from antiquity to the 16th and 17th centuries, as well as cultural attitudes to daily life, ritual and death. “But much of the course will involve how important art, architecture and what we generally call ‘material culture’ was for the ways that Jewish communities saw and were seen by the more dominant communities and states they lived in,” says Baboula.

Jewish Art: Ancient and Medieval will also look at questions like, did ancient Judaism preclude the use of the human figure in art? What are the decorated Jewish books like? How did Judaism interact with the visual traditions of the Christian and Muslim communities until the dawn of the modern era?

“Let’s get to know an exciting visual tradition that is often little known or recognised by the wider public,” says Baboula.