Back in 2015, then-Visual Arts student Kyra McLeod was commissioned to paint a mural on the walls of the Campus Bike Centre. Her abstract design livened up a visually neutral space, and set the stage for future mural expansion. 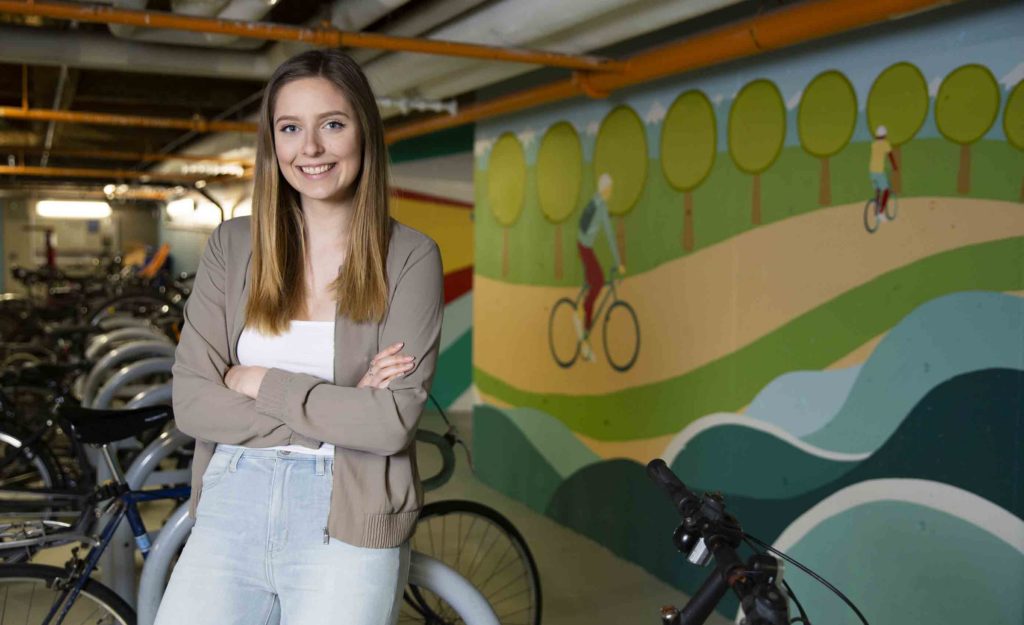 Now fast-forward to spring 2019, when third-year Visual Arts student Meaghan Crow was commissioned to expand the mural by campus sustainability coordinator Susan Kerr. But Crow’s mural wouldn’t just be an expansion of the original—it was also conceived of as a participatory community art project that would engage a group of UVic employees during the biannual Connect U staff conference.

“A mural is an excellent way to celebrate the interconnection between art, sustainability and community building and to actually experience those connections in a tangible way,” says Kerr.

“I wanted to provide an experiential learning opportunity for a Visual Arts student to design and coordinate a community mural, which further develops their art portfolio and project-managing skills. The mural would also build UVic community pride and further enhance the Campus Bike Centre and as a recognized cycling hub on campus—it was a win-win-win situation all around.”

One issue right off the top for Crow? By her own description, she’s not exactly “an avid cyclist” and wasn’t even aware of the Campus Bike Centre before tackling this project. But that’s not to say she isn’t aware of the larger issues around commuting and minimizing our collective carbon footprint.

“I do think it’s important to consider how our lifestyles affect our environments, and consider if our daily practices are sustainable or if we could consider other options like biking instead of driving, which can benefit lessening the footprint we leave and also our health,” says Crow. 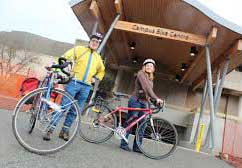 The entrance to UVic’s Bike Centre

The Campus Bike Centre is open 24/7 and offers over 230 indoor bike parking spots, plus lockers, racks, air pumps, electric charging stations and a bike kitchen with basic DIY repair tools. It’s also home to the SPOKES bike loan program where, since 2003, volunteers have been giving new life and use to old bikes by diverting waste from the landfill, improving community health and taking action on climate change.

UVic is very much a bike-friendly campus, committed to creating a campus environment that’s both convenient and safe for cyclists, with showers and changing rooms in 10 buildings on campus. With our award-winning Campus Cycling Plan and the continuing upgrades to bike lanes in both Saanich and Victoria, UVic is dedicated to being a leader in cycling infrastructure and active transportation.

Expanding one mural into two

But more than just the philosophical connection between cycling and community, Crow’s ambition was to visually unite her mural with the pre-existing one. 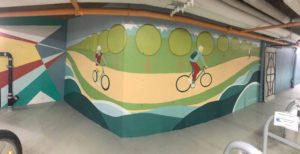 The point where the original mural meets the new mural

“I knew I wanted to have some aspect of the two murals line up to connect them, and decided on the point midway up the wall,” she explains. “I used it in a way in which transitions the abstract into a more representational image. One of my initial ideas was a path like one or the larger ones at UVic going to the library with the rows of trees. I kept developing it and simplifying it until I had an image that represented a clean Victoria-esque environment.”

Kerr is particularly pleased with how the two murals connect. “I love the dynamics,” she says. “At first impression one might not see the connection, but if you stand back, you’ll notice Meagan’s cyclists are actually emerging from Kyra’s original mural.”

Conceiving and designing a mural is one thing—but part of this commission was working with nearly 40 different employees who weren’t artists. 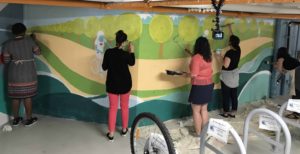 “This was the first time I have worked on a public mural project, and I really enjoyed it,” says Crow. “It was a great opportunity to connect with many people from UVic that I otherwise would not have crossed paths with, and it was great to see so many people take a look back at what they’d contributed to the mural and feel good about it.”

The concept was simple: Crow would sketch her design on the wall, then apply daubs of paint for the participants to fill in—almost like a paint-by-numbers design. But successfully pulling it off meant a great deal of preparation, as well as careful managing on the day-of, when small groups of six painters were coordinated in 30-minute sessions to avoid overcrowding.

“I was surprised to see how smoothly the process went,” says Crow. “I think part of that came from assigning a specific job with a specific tool to each individual so there wasn’t much confusion of where people were supposed to paint, and trying to space people out around the mural where possible. It was great to be able to see the bulk of it come together through the day, and to see the painters express how they enjoyed the experience as a break from their normal schedules.”

Crow then spent a few days doing finishing touches on the mural: outlining the trees, cleaning up the edges and touching up a few spots that had been mis-painted.

Sustainability’s Susan Kerr is thrilled with how the overall project worked out. 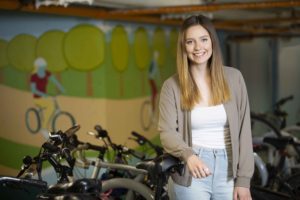 “Meaghan did a wonderful job all the way through—this was one of those projects that was fun and exciting from start to finish,” she says. “I really enjoy working on projects with students, and it’s even better when the campus community is involved . . . especially when they can see firsthand the wonderful work and presence our students bring. It’s one of the reasons why we work here.”

Crow is similarly pleased. “If an opportunity to do another mural project arose, I would love to continue with it!”

Opportunities like this are one of the reasons why the artist from Brentwood Bay chose UVic. “I decided to take Visual Arts at UVic because attending a university rather than an art college would allow me to explore other areas I may be interested in: business classes that could help me gain skills to start my own art -elated business, or education classes to pursue the route of becoming an art teacher,”  says Crow.

Ultimately, Kerr hopes everyone who uses the Campus Bike Centre will feel the same way she does. “It makes me smile—both murals do,” she says. “I can’t wait for the next campus mural!”

Be sure to check out this album showing the progression of the mural, from original concept to finished project: