Visual Arts photography professor Vikky Alexander took the idea of “mall art” to new heights recently with her pieces in Toronto’s entry in the global Nuit Blanche contemporary art event. Alexander had three enormous 30 by 30-foot photographs from her Crystal Palace 2011 series hung in the atrium of Toronto’s Eaton Centre as part of this free, all-night event that occurred in more than 20 cities around the world this year. Her photos were just one part of T-dot’s seventh annual happening, which featured 150 projects spread throughout the downtown core. 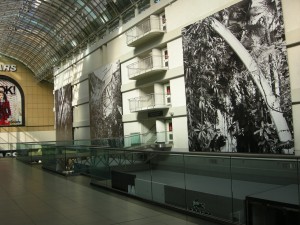 As the Nuit Blanche description makes clear, “the glass and iron structure of the Toronto Eaton Centre atrium echoes the framework of the Palm House in [Alexander’s] photographs. Placing the images in the mural-sized spots reserved for advertising brings a sudden reversal of function to the mall, suggesting its imminent reclamation by aggressively verdant nature.” Not that this is Alexander’s first foray into mall culture. “These new photographs relate directly to the West Edmonton Mall series I made in 1992 where the tropical plants, birds and fish are juxtaposed and contained within the utopian consumerist structure of the North American mall,” she says. 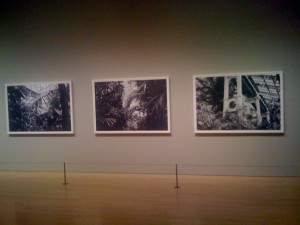 Alexander’s work in the National Gallery of Canada

And in other Alexander news, 10 of her black and white digital images were recently purchased by the National Gallery of Canada. Four of these images from her Island series are up now in NGC’s Contemporary section, and all will be on view for the upcoming exhibit Builders: Canadian Biennial 2012, opening November 2 and running through to January 20, 2013. As the NGC describers it, “Builders presents more than 100 recent and significant acquisitions by emerging and established artists instrumental in shaping perspectives in Canadian art today. The exhibition reflects the work of the Gallery’s curators in building the collection through an informed understanding of contemporary Canadian art across diverse media, environments and generations.”

In other Visual Arts news, assistant professor of video and drawing Jennifer Stillwell is one of 13 artists in the Winnipeg Now exhibit, showcasing contemporary Winnipeg artists. Part of the city’s official centennial celebrations, all of the featured artists either live or have lived in the ’Peg, and the opening coincided with the Winnipeg Art Gallery‘s participation in Nuit Blanche. Stillwell picked up her BFA honours from the University of Manitoba in 1995 before moving on to a MFA with distinction for The School of the Art Institute of Chicago, and has since exhibited widely. She was also a semi-finalists for the prestigious Sobey Art Award in 2006 (which was won in 2011 by UVic Visual Arts alum Christian Giroux and his artistic partner Daniel Young). 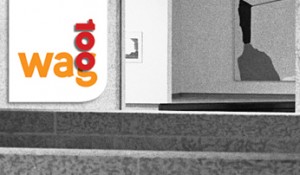 As the show makes clear, Winnipeg  has earned a world-wide reputation as an art-producing centre and artists from there regularly exhibit internationally. Curated by Border Crossings editor Meeka Walsh and art critic and professor Robert Enright, Winnipeg Now not only highlights the work of the featured artists but also brings their most recent work back home: of the 13 artists in the exhibition, 12 are making new work for the exhibition. Stillwell’s new large paintings are described by Winnipeg Now organizers as “occupy[ing] a space somewhere between modernism and cake decorating.”

“Historically, the art that Winnipeg¹s long-standing reputation rested on was drawing, painting, sculpture and photography,” say the organizers. “What the work in this exhibition indicates is that the younger generation of artists has adopted a more hybridized approach to art-making. The result is a collection of work that resists categorical boundaries and combines a number of art practices.”

Winnipeg Now continues at the Winnipeg Art Gallery through to December 30. 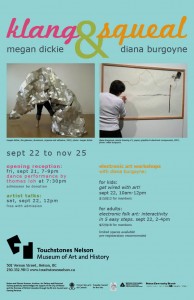 Another member of the Visual Arts faculty with a current gallery exhibit is busy sessional instructor Megan Dickie, whose Klang & Squeal with fellow artist Diana Burgoyne is on now at Touchstones Nelson: Museum of Art and History.

Dickie’s kinetic sculpture “The Gleamer”—a Buckminster Fuller-inspired aluminum quilt—invites viewers to crawl under and mold into new forms. (At the September 21st opening reception, a professional dancer performed with “The Gleamer.”) As the exhibit states, “in their respective practices, both artists explore the notion of interaction through very different, but complementary means.” 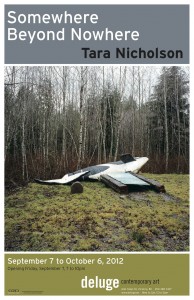 As the Deluge description notes, “Since completing her MFA thesis work in Haida Gwaii two years ago, Nicholson has integrated the peripatetic tendency prevalent in so much of contemporary art practice further into her work, using travel and temporary relationship as keys for developing a body of work based on locations in BC, Alberta, Ontario, Quebec and Holland. She insinuates herself into new communities to determine local byways, campsites and landmarks, temporary shelters and ephemeral spectacles: a swimming hole in an abandoned quarry, ski-doo graveyard, a decaying papier-mâché mascot killer whale, dumped like a corpse at the edge of summer woods.” 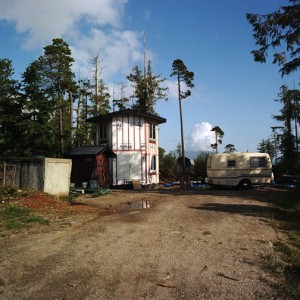 And, as local art writer John Luna noted in the fall issue of Galleries West, “A phrase in Nicholson¹s exhibition statement undertakes the contradictory conjoining of ‘local and remote.’ This in itself is a comment on the disjunctive way that modern development thrusts fragments of suburbia into what was previously wilderness, at the same time leaving behind pockets of dilapidation in the form of desolated retreats of past-tense recreational seclusion or forsaken networks of resource extraction infrastructure. Lapsed, lost or unlikely habitation abounds in this work, from a teepee on Salt Spring Island, to a flagging Conservative campaign sign tacked to an aging industrial compressor, to a rustic tower clad in pristine Tyvek; the vacated hideaway, the forgotten boomtown, or subcultural otherworld gone to seed. In one of the images from Holland, Kuierpadtien, the torqued sheath of a worn blue water slide relays the colours of an improbably idyllic tableau of children paddling on an artificial lake. Nicholson seeks out visions that in her words, ‘hover between reality and fantasy,’ a fluxing of nature and artifice too precious or precarious to last forever . . .” 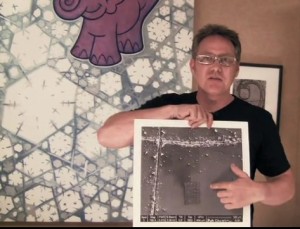 Robert Chaplin with an enlarged image of his nanobook

In Visual Arts alumni news, Vancouver-based artist Robert Chaplin has been recognized by the Guinness Book of World Records for creating the smallest reproduction of a printed book. As reported in the Vancouver Sun, Chaplin’s children’s book Teeny Ted from Turnip Town was “etched onto crystal-line silicon using a focused ion beam with the training and equipment of Simon Fraser University scientists in 2007.” But the 1990 Visual Arts graduate only found out this year that he had been honoured by Guinness. 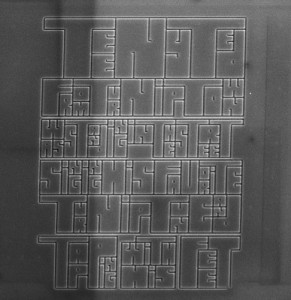 You’d need very, very strong glasses to read this story to your kids

Chapin’s $20,000 one-of-a-kind “nanobook” measures 0.07 mm by 0.1 mm and is made of 30 linked micro-tablets—but no matter how good your vision is, you’ll need an electron microscope to read it. And in order to make a more generally accessible print version of Teeny Ted, Chaplin launched a Kickstarter campaign to create a “large print” version and successfully raised the $17,000 needed to produce it.

Talk about thinking big with a small project! 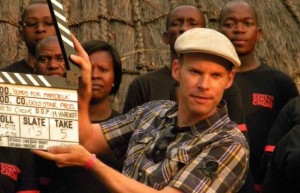 Finally, the Times Colonist reports that Visual Arts major turned Leo Award-winning filmmaker Jason Bourque will be back in town shooting a sci-fi disaster flick called Stonados. Bourque, who earned his BFA back in 1995, will even be shooting on campus for this movie about Boston coming “under siege by a devastating weather anomaly,” as he puts it. (Yep, as the title implies, it’s all about giant stone-throwing tornadoes.) Stonados will eventually air on SyFy Channel.