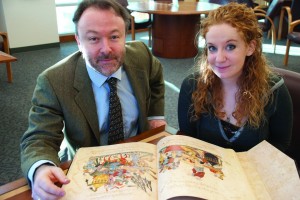 Dr. Marcus Milwright and student Natalie Gilson examine the facsimile of the Maqamat of al-Hariri, a famed 12th-century manuscript that was acquired earlier this year. Scroll down for news about another important Islamic manuscript acquisition. (Photo: Robie Liscomb)

History in Art’s Marcus Milwright has been awarded the position of scholar-in-residence at Shangri La, a Centre for Islamic Arts and Cultures, in Honolulu, Hawaii.

Milwright, director of UVic’s Medieval Studies program and associate professor of Islamic Art and Archaeology, will be in residence from April 14 to May 6, 2012, with a focus on studying the late Ottoman and French Mandate periods (i.e. 18th to mid-20th century) Syrian artifacts in the collection. “In recent years I have been working on translating sections of an Arabic dictionary of the crafts of Damascus, written between about 1890 and 1906,” says Milwright. “The aim of this residence is to establish ways in which this valuable written source can be used to enhance museum displays of Middle Eastern art of the later Islamic period (1700-1940).” 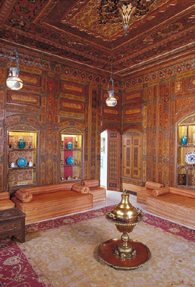 One of the rooms at Shangri La

Part of the charitable Doris Duke Foundation, named for the influential American philanthropist, Shangri La’s scholar-in-residence position is a competitive and thematic program that invites select scholars and artists whose work complements the collection, while also advancing the study and understanding of Islamic art and culture. Chosen scholars and artists are given the opportunity to pursue their own academic and creative work, while also presenting public programs such as lectures, workshops and performances. Milwright will be the latest among such other recent scholars as Thalia Kennedy, Olga Bush and Linda Komaroff, and artists Zakariya Amataya and Emre Hüner.

Once the residence of the late Doris Duke, Shangri La still houses most of her collection of Islamic art. (One notable exception is the beautiful 18th-century house interior from Damascus that now forms part of the renovated gallery of Islamic art at the Metropolitan Museum.) The daughter of American tobacco and electric power industrialist James Buchanan Duke, Doris was famously branded “the richest girl in the world” after inheriting his estate when she was just 12 years old. Following her marriage to American diplomat James H.R. Cromwell in 1935, Duke decided to build a seasonal home in Honolulu after visiting both Hawaii and many Muslim countries for the first time while on her honeymoon. Captivated by Islamic cultures and enamored with Hawaii, Duke designed a new residence with the ambition of evoking “the beauty and character of each.” As noted on their website, Shangri La borrows architectural elements and artistic sensibilities from regions of the Islamic world, and blends them with a distinctly Hawaiian landscape that features sweeping ocean views, exotic gardens and a 75-foot saltwater pool. (And hey, if you’re looking for a job, Shangri La is currently on the hunt for a historic housekeeper.)

And in other news, Dr. Milwright has been elected as a fellow of the Royal Asiatic Society of Great Britain and Northern Ireland. Founded in 1823 (and receiving its royal charter in 1824), this is one of the oldest societies devoted to the study of Asia and the Islamic world. Milwright has previously published articles and book reviews in Journal of the Royal Asiatic Society.

Finally, the McPherson Library has purchased a facsimile of the 12th-century Arabic book, Kitab al-Diryaq (Book of Antidotes). Written by an anonymous Arabic author, but making extensive use of ancient Greek medical knowledge, the original of this precious manuscript is now housed in the Bibliothèque Nationale de France in Paris. “Apart from its importance for the study of Islamic science, this is also one of the earliest illustrated books in the Arab-speaking world,” explains Milwright. “Particularly notable is the double frontispiece that contains a complex set of astrological images which relate to a solar eclipse which occurred in 1199. These sorts of facsimile are vital for the teaching of Islamic art and the history of book.” 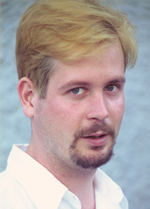 The Book of Antidotes was bought using monies from the Owen Padmore Memorial Fund. Established in 2002 by the family of History in Art student Owen Padmore (1970-2001), who was fascinated by Islamic visual culture, the fund is designed for the purchase of books on Islamic art and architecture. The Owen Padmore Fund also contributed to the purchase of another important facsimile last year, the 13th century Maqamat of al-Hariri (seen above), about which Milwright recently gave a presentation as part of the Predigital Book Research Collective in the McPherson’s Special Collections. “This is a tremendous resource for teaching,” Milwright said about the Maqamat of al-Hariri at the time. “When we teach manuscript painting, one of the frustrations is that we can’t take people to see the originals. With this facsimile, you can do almost everything you can do with the original manuscript.”

The Owen Padmore Fund continues to make an important contribution to the study of Islamic visual culture at the University of Victoria. While the McPherson library has been collecting Islamic art books for 40 years, the Padmore Fund has helped purchase over 120 books on Islamic art, architecture and archaeology since 2002, making it one of the most important collections in this field of study in Canada.