Mackie’s back in town

For a song written only days before the premiere, “Mack the Knife” has not only become the most recognized number from The Threepenny Opera, but also a musical standard performed by some of world’s greatest artists. The history of the song also represents a fascinating journey for how we view one of theatre’s most notorious villains, the character MacHeath—better known as Mack the Knife. 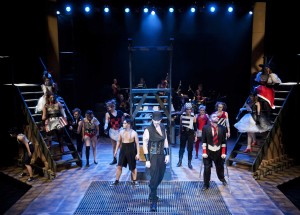 Bertolt Brecht’s The Threepenny Opera is a landmark of modern theatre. After opening in 1928 in Berlin, it became one of the biggest hits of the 1920s. Here was a satire so irreverent and cutting in its humour, so gritty in its reflection of the down-and-out, and so uncompromising in its criticisms of post-WWI German society that it would influence all theatre thereafter. Kurt Weill’s precedent-setting, jazz-influenced music would create a resurgence in the musical worldwide.

Opening November 5 at UVic’s Phoenix Theatre, this mainstage production of The Threepenny Opera is directed by Department of Theatre professor Brian Richmond who has set it in an absurd, near-future dystopia. Part biting satire and part sheer theatrical innovation, this famed musical is a landmark of modern theatre. “This is quite possibly the most important piece of musical theatre in the 20th century,” says Richmond, who worked with Applied Theatre professor Kirsten Sadeghi-Yekta to bring a strong sense of realism to this production.

To learn more about the vision behind this production, director Richmond will be giving a pre-show lecture at 7pm on Friday, November 6. The Threepenny Opera then runs 8pm Tuesday to Saturday to Nov 21 at UVic’s Phoenix Theatre, with a 2pm matinee on Saturday, November 21. Tickets range from $15 to $25 and can be charged by phone at 250-721-8000. 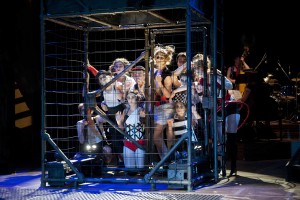 The Threepenny Opera borrows from the 18th-century The Beggar’s Opera and offers an edgy mix of biting satire and sheer theatrical innovation as it takes aim at the traditional bourgeoisie and reveals a society where law is fickle, money corrupts and crime absolutely pays. Richmond is well-known for breathing fresh life into classic works, as evidenced by past Phoenix productions like Guys & Dolls, Dark of the Moon, The Wind in the Willows and Romeo & Juliet.

“Mack the Knife,” the song that has since become an iconic symbol of the play, was only added at the last minute at the behest of Harald Paulsen—the actor playing MacHeath in the premiere—as he wanted a number that would better introduce his character. A number of translations and versions of the play were produced following the original, but it wasn’t until Marc Blitzstein’s 1954 New York City version that Threepenny became a hit in America, ensconcing the play and its music in popular culture. Conducted by the preeminent Leonard Bernstein (a friend of Blitzstein) and featuring Lotte Lenya (Kurt Weil’s widow, who had been part of the original Berlin cast), it ran Off-Broadway for over six years and broke records set by Oklahoma. 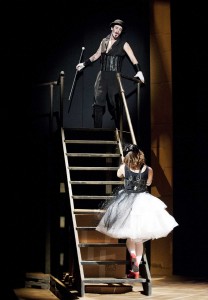 It was Blitzstein’s translation of “Mack the Knife” that was famously recorded by some of the biggest stars in the 1950s and ’60s, including Louis Armstrong, Bobby Darin, Ella Fitzgerald, Duke Ellington and Frank Sinatra. While based on the Blitzstein version, each artist made the song his or her own, accentuating or repeating different lyrics to highlight Mackie’s exploitive playboy nature. Musically, some interpreted the song with more swing, more jazz, more up-tempo, more lounge, as best fit the artist’s style. Armstrong spontaneously added Lotte Lenya’s name into the lyrics as she watched his recording session. Sinatra added references to many previous singers in his lyrics.

In 1976, a new version of Threepenny opened on Broadway (later made into a movie), featuring a version of “Mack the Knife” that returned to Brecht and Weill’s original idea of a murder song that accentuated MacHeath’s trail of victims more than his womanizing ways. This version was recorded in the ’80s and ’90s by the likes of Lyle Lovett, Sting and Nick Cave. Then, in 1994, Robert David MacDonald and Jeremy Sams hoped to recapture some of the original edginess of Brecht’s irreverent cutting humour and mounted a version of Threepenny with an emphasis on Mackie’s more gruesome villainous ways.

It is this most recent translation that director Richmond chose for the Phoenix production. “Directors often ask not only how, but why an audience responded to a particular work at the time of its premiere,” he says. “[We] then try to build an interpretive bridge between this central nerve, or zeitgeist, of the culture from which the work arose and the times in which we live now.”

Still reeling in the aftermath of the war, the 1920s German Weimar government was plagued with hyperinflation, political extremists, severe poverty and famine. At the same time, there was false sense of affluence and indulgence among the elite, leaving Germany teetering on the brink of inevitable disaster. As young artists and political activists, no doubt Brecht, Weill and friends could see that this house of cards was about to fall. 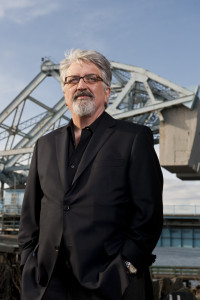 Director Brian RichmondThe 1994 translation restores the grittiness and angst of the original for today’s audiences. “Looking at the present day conditions—economic, political and social—it’s not difficult for current audiences to relate to this fear of an impending collapse of society,” says Richmond. “Thankfully this has not happened yet . . . which is why we decided to set this production in the future, where we can take for granted that society has already collapsed. We felt that an absurd dystopian future would further highlight the absurdity of how man’s appetite for greed, lust and gluttony, keeps contributing to our downfall.”