Anyone concerned about post-degree prospects for Fine Arts students should consider the ongoing success of students in our Department of Theatre. For 50 years now, Phoenix Theatre has been producing some of Canada’s finest theatre artists by instilling in them the necessary skills, training, discipline and creative mindset that leads to professional careers both onstage and off. And nowhere is this more evident than in the annual Fringe Festival. 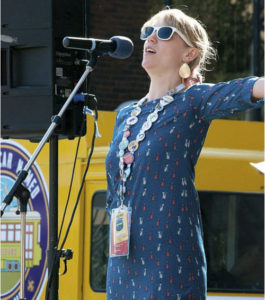 Whether acting, writing, directing, designing or managing backstage, Phoenix alumni and students seem to be everywhere this year. And while the Fringe Program Guide will list those involved in a creative capacity, let’s have a special shout-out to those working behind-the-scenes as technical assistants or Front of House managers, including Simon Farrow, Freya Engman, Zoe Hibbert, Carolyn Moon, Andrew Barrett and Leah Hiscock.

The 30th annual Victoria Fringe Festival runs August 22 to September 4 at various venues around the city. Remember, you need a Fringe Button to get in ($6), and most shows run $9 to $11, either at the door or in advance at Ticket Rocket. Pick up a 5-show Munchcard ($57) or a 10-show Frequent Fringer pass ($82) and see as many as you can! Most shows run multiple times, so consult the Fringe Program Guide for showtimes and venue locations.

Here’s a quick rundown of Phoenix at the Fringe, with UVic participants highlighted in bold.

A Quiet Season (Enigmatic Events) – After a series of global tragedies, four survivors are trying to exist in a near-abandoned Victoria. Can they go from mere survival to building a new life? With each performance, a new series of trials will be faced down… challenges chosen by the audience. Mixing improv, traditional theater and role-playing, A Quiet Season is a story-telling game on stage.

Birdwatching (First N Last Productions) – Nolan is being watched . . . only, the past and present have gotten so foggy since she moved from Vancouver to Toronto, she can’t tell whether the eyes on her back are real or imagined. Birdwatching moves seamlessly between dance and dialogue as Nolan struggles to ground herself in the here and now. First presented in the Theatre department by SATCo, Birdwatching is written by Jack Hayes, directed by Kate Loomer, assistant directed by Molly McDowell Powlowski, stage managed by Kat Taddei, designed by Sean Thompson, Delaney Tesch, Nic Beamish and Carl Keys. Featuring Emma Grabinsky, Rachel Myers, Brett Hay, and Taryn Yoneda. Marketing by Victoria Simpson and Maritez Frazer.

Bowser (Tribal Writes) – In the backwater of Bowser, BC, a cheeky seagull becomes an ex-stripper’s unlikely confidant as she recalls the loves and losses in her life. “Christine Upright is terrific in this funny and touching one-person (with seagull) show,” says Ian Ferguson. With marketing support by Hannah Bell.

Cafe Soap Operas! (workingclass theatre) – When the going gets tough, the tough get caffeinated! Follow the trials and tribulations of a group of regulars at 2%Jazz as they live out their lives over a damn good cuppa joe. Narrated by the Barista (you know the one), Cafe Soap Operas! is a live, episodic sitcom that’s good to the last drop. Featuring Joanne James, Emma Hughes, Kristen Iversen, Nicholas Yee, Markus Spodzieja, Tristan Bacon, Keeley Wilson and Sophie Underwood.

The Jupiter Rebellion: A Zach Zultana Adventure (Active Salad Productions) – Creator and star Jeff Leard returns to Victoria with his new action-packed, solo sci-fi comedy. It’s got everything you’d expect from a big-budget, silver screen spectacular: action, romance, cool special effects, socialist undertones . . . and a stool. ”If you want to see the best solo show at the Fringe this year, blast off with Zach Zultana.” ***** Edmonton Sun

Disney’s Camp Rock (performed by students of St. Michaels University School) – Have you “got what it takes” to join the jam? Are you “too cool” for school? In the spirit of the summer camp theme, come take in Camp Rock. Performed by over 20 local teens (and based on the hit 2008 Disney film), this show features upbeat songs to accompany the usual favourite camp fare, from food fights to talent nights. Jams of all sorts fill this show with fervent fun and raucous spirit. Directed by Cam Culham.

Driftwood (Hawk Mom Productions) – Have you ever taken a break from someone significant in your life, be it physical, emotional or otherwise? Driftwood is a storytelling series where a variety of Victoria artists recount a time when they were adrift — possibly lost, possibly free, definitely personal. Click here for the storyteller schedule, which includes the UVic likes of Esther Rzeplinsk, Kathleen O’Reilly, Tea Siskin and Cati Landry. Created by Department of Writing MFA Robbie Huebner, with Ian Simms (director/admin/jack-of-all trades) and featuring Melissa Taylor, Robbie Huebner, Tea Siskin, and Caitlin Holm.

Effie & the Vampire: A Lesbianistic Musical Melodrama (Dragon Monkey Theatre) – Enjoy singing along, booing and cheering your favourite villains and heroines in this gay 1890’s musical set in Fort Victoria. Iron-willed Lady Rockland has a huge crush on Lord Carnsew, but he’s been promised to her daughter, Lady Margaret. Meanwhile, the beautiful servant Effie secretly adores Lady Margaret! And what’s going on between Floozie McSwill and Bridget the housekeeper? Co-created by Wendy Merk.

The Quiet Environmentalist (Saturna Theatre) – This story is not about the environment; this story is about our mothers, our frustration with, and their love for us while we starved ourselves and put ourselves back together again. (Trigger warning: eating disorder.) Created by Carolyn Moon and SJ Valiquette, featuring SJ Valiquette.

Sky Corner (Side One) – A collaboration of three new works, each with a different theme and message, but connected by their ethereal and passionate cores. Movement and voice are combined to bring this fresh album to life and offer ponderings on why we’re here, where we’re going and what it is that we do in-between. Featuring Hillary Wheeler.

The Art of Eight Limbs (Vino Buono) – The latest work by last year’s “Favourite New Play” winner Kat Taddei (Department of Writing), this show focuses on three different eccentrics who are torn out of their comfort zones and thrust into a bizarre chain of causally-related events. Don’t. Get. Comfortable. Directed by Chase Hiebert, featuring Lucy Sharples and Arielle Permack. Designs by Delaney Tesch and Zoe Wessler, marketing by Victoria Simpson.

Tongues in Trees: The Reminiscences of Long Gun Jack Irvine (Crooked Oak Productions) – Listen closely. Do you hear those sounds all around you? They are not just noise. They are your story: our story. Combining historical theatre and elements of magic realism, this play explores Victoria’s timeless past through the perceptions, memories and fantasies of one who was there. Created by Ben Clinton-Baker.

Wild/Society (Star Star Theatre) – Rabbit wants to be the most popular city lady when she moves to the newest development in town. Raccoon couldn’t care less about social politics. Two penguins spice up their time in hiding by getting very drunk, very high, and waxing poetic about climate change. What will the city ladies think of Raccoon? And why are there icebergs in the pool in July?! Created by Mika Laulainen.