Third year Visual Arts student Cassidy Luteijn is making the news as one of the finalists for a Canada 150 condom wrapper design contest. Her uniquely “Canadian” imagery includes a hippy beaver and a moose draped in underwear. 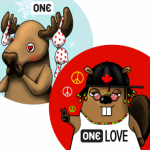 As she explains in this interview in the Martlet, it was Luteijn’s experience as a UVic student residence leader that taught her the importance of safe sexual health. “I think the students — especially in residence, I find — are just coming out of being under their parent’s roof, and with that comes a lot of exploration,” she told the Martlet‘s Cormac O’Brien.

The story has so far been reported by not only the Martlet but also CBC Radio, the Huffington Post and others. “It was pretty awesome,” says Luteijn, describing her shock at the news to the Martlet. “You could almost just blink a little bit and make sure you’re seeing what you’re seeing.”

Cassidy’s two designs   were selected out of hundreds of, ahem, entries by a panel of judges at contest sponsor ONE Condoms to make it into the top 50.

The public can vote for the final 10 winners on the contest page through July 12. Winners will be chosen on how well the designs celebrate Canadian life, culture and history. The ultimate winner will earn $1,000, a year’s supply of 365 condoms (featuring their design, of course) and 10,000 condoms donated to the Canadian health organization of their choice.