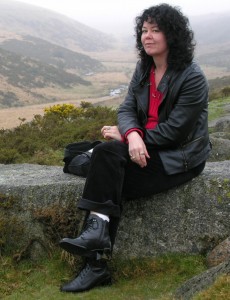 Department of Writing instructor Madeline Sonik has been shortlisted for the $25,000 Charles Taylor Prize for Literary Non-Fiction for her 2011 book, Afflictions & Departures. The Charles Tayor nom comes on the heels of her inclusion on the longlist for the BC National Award for Canadian Non-Fiction for the same book.

The 2012 Charles Taylor Prize jury—authors Allan M. Brandt and Stevie Cameron, and non-fiction publishing consultant Susan Renouf—considered 115 books submitted by 35 publishers from around the world. Sonik is among five authors vying for the $25,000 purse, alongside Wade Davis for Into the Silence: The Great War, Mallory, and the Conquest of Everest (Alfred A. Knopf Canada); Charlotte Gill for Eating Dirt: Deep Forests, Big Timber, and Life with the Tree-Planting Tribe (Greystone Books); JJ Lee for The Measure of a Man: The Story of a Father, a Son, and a Suit (McClelland & Stewart); and Andrew Westoll for The Chimps of Fauna Sanctuary: A Canadian Story of Resilience and Recovery (HarperCollins Publishers).

Published by Anvil Press, Sonik’s Afflictions & Departures: Essays earned the praise of the jury for being “startlingly original”. “Madeline Sonik’s moving story of her childhood defies all our expectations of memoir. She captures crystalline moments of childhood memory and links them in a daisy-chain with corresponding events of the tumultuous societal change taking place outside her home. It is North America in the 1960s and 70s and her letter-perfect, child’s-eye view of the world brings back that time with such intensity that the reader can almost smell and taste it. Droll, tragic, and absolutely compelling, Afflictions & Departures is a visceral portrayal of a family imploding.” 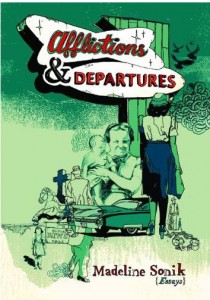 An award-winning novelist, short story writer, children’s author, poet, editor and non-fiction writer, Sonik’s previous books include Drying the Bones and Arms (both from Nightwood Editions), plus Belinda and the Dustbunnys (Hodgepog) and Stone Sightings (Inanna); her work also appeared in the 2011 collection, Slice Me Some Truth: An Anthology of Canadian Nonficiton (Wolsak & Wynn).

The Charles Taylor Prize for Literary Non-Fiction recognizes excellence in Canadian non-fiction writing and emphasizes the development of the careers of the authors it celebrates. Since its inception, the prize has fostered a growing interest in non-fiction, engaged Canadians in the genre of literary non-fiction, and boosted sales of the winning authors’ books. Awarded annually to the author whose book best combines a superb command of the English language, an elegance of style, and a subtlety of thought and perception, the prize consists of $25,000 for the winning author and $2,000 for the runners-up, in addition to extensive promotion and publicity to help all books stand out in the national media, bookstores, and libraries.

The trustees of the Charles Taylor Foundation are Michael Bradley (Toronto), Judith Mappin (Montreal), David Staines (Ottawa), and Noreen Taylor (Toronto). They established The Charles Taylor Prize for Literary Non-Fiction to commemorate the life and work of the late Charles Taylor, one of Canada’s foremost essayists and a prominent member of the Canadian literary community. Charles Taylor was a foreign correspondent with The Globe and Mail and the author of four books: Radical Tories; Reporter in Red China; Six Journeys: A Canadian Pattern; and Snow Job.

The 2012 prize finalists will speak at Ben McNally’s Authors Brunch on Sunday, March 4, 2012. For tickets, please visit www.benmcnallybooks.com. The prize winner will be announced at a Gala Luncheon and Awards Ceremony on Sunday, March 5 at Le Meridien King Edward Hotel. The winner will be featured at the International Festival of Authors in October, 2012.