Off the stage and into the world 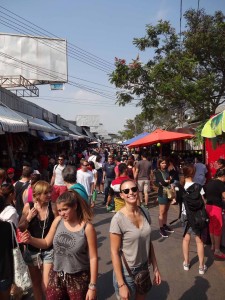 The best way to gauge the impact of your work is always to test it in the field. For Fine Arts undergrad Clare Mathison, that meant getting out of UVic’s Phoenix Theatre and onto the world stage . . . in Thailand.

Mathison was only the third student to participate in the Department of Theatre’s exchange with Bangkok University, established in 2013. Now graduating with a BFA with Distinction, Mathison spent the first five months of 2015 living and working in Bangkok, where she helped design sets and lights for a number of different productions, ranging from classics like Who’s Afraid of Virginia Woolf? and Hedda Gabler to the recent Broadway hit Vanya and Sonia and Masha and Spike.

While the theatrical basics may not dramatically change from stage to stage—the design skills she developed working on such recent Phoenix productions as A Midsummer Night’s Dream, Picnic and Unity 1918 would work just as well in Thailand as in Canada—Mathison did have to adjust to the different environment, and language. 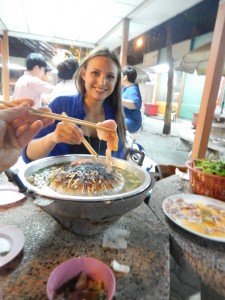 Mathison has a taste for international studies

“They have so much patience in Thailand, and tend to be more understanding with the people they work with,” she says. “They are incredibly kind and generous hosts for international students; it honestly would have been so much easier for them to just work with other Thai students, but they always included me in their projects.”

Theatre professor and exchange leader Allan Stichbury has high praise for Mathison. “Clare was an exceptional student both here and in Bangkok. The chair of Bangkok University’s Performing Arts department told me how thrilled he was to have her designing in their department, and said that she brought the importance of attention to detail to a new level for their students.”

Describing her as “a great ambassador for the Theatre department, UVic and Canada,” Stichbury was told that Mathison “helped Bangkok University students understand that you can stand up for what is right and or important while at the same time being respectful, open-minded and adaptable.” Mathison also makes it clear how she also benefitted emotionally from her time overseas. “It was invaluable to learn from them, and then try to implement it back here—learning how to roll with the punches instead of letting everything stress me out.” 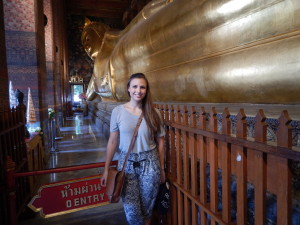 And while what she describes as “the awesome program, facilities, faculty and staff” of the Theatre department has well-prepared her for what she hopes will be her next step—designing lighting for the music industry—the Richmond-BC raised Mathison also realizes the opportunities that came with studying at UVic. “The Bangkok exchange was so much more than I ever hoped for—I learned so much more about myself and the world than I thought I was going to.”

Her advice for future Theatre students? “Don’t get discouraged,” she says. “You’re on the bottom of the heap in first year and it may seem like you’re not getting to do the stuff you want, but you soon realize it’s an essential foundation to bring everyone up to the same level. After that, you’ll work your butt off.” Any final thoughts? “Go on exchanges!” she says with a quick laugh. “Go to Bangkok!”