She has helped uncover the forgotten works of suppressed composers and played alongside the likes of the National Orchestra of Taiwan and the Moody Blues. Now, the research and creative practice of School of Music flute professor and music scholar Suzanne Snizek is receiving renewed attention with the news that she is among the 10 recipients of UVic’s inaugural REACH Awards. 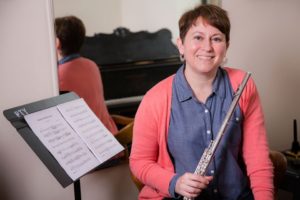 “This is a tremendous honour,” says Snizek. “I am very thankful to my colleagues who took the time to nominate me, and happy that my work has been recognized in this way.”

Combining the Teaching Excellence Awards with the Craigdarroch Research Awards, the REACH Awards celebrate the extraordinary teachers and researchers who lead the way in dynamic learning and make a vital impact at UVic, in the classroom and beyond.

“The REACH Awards mark a new era of recognition for our university,” says UVic president Jamie Cassels. “By honouring research and teaching together, we acknowledge how they’re inextricably linked for the betterment of our students, our university, our partners and collaborators, and society at large.”

Snizek, who received the Award for Excellence in Artistic Expression on May 25 at an evening ceremony at the Royal British Columbia Museum, is an expert in “suppressed music” — classical music silenced under the Nazi regime because of the composers’ ideologies, aesthetic or Jewish heritage. Many of these works are exceptional, but are rarely performed to this day.

“If it’s a good piece of music, it should be played,” says Snizek, who was delighted when one of her music students picked two suppressed pieces for an end-of-year recital. “One of the challenges for this music is that it gets ghettoized again as ‘suppressed music.’ So I’m trying to present it on its own terms, and include it in my teaching here so students can encounter this music for themselves.”

You can listen to some samples of Snizek playing suppressed music here.

Indeed, Snizek has dedicated much of her academic career to bringing this suppressed music back to life. Through audio recordings, publications, performances and lectures around the world, she’s part of a global effort to bring these forgotten treasures back into our musical and historical consciousness, and to remind us what can happen when the rights to free speech and artistic expression are violated.

Snizek’s research was originally inspired by the illegal detentions at Guantanamo Bay in the early 2000s. “The inherent cruelty and injustice of ‘indefinite detention’ has always been particularly unacceptable to me and so was a natural starting point for my research.” Unfortunately, she says she isn’t shocked that issues of personal and artistic suppression are still as relevant today as in the World War II era.

“It doesn’t at all surprise me, but it does concern me,” she admits. “None of this is just dry history, it all has a very real human impact: in generations of family trauma, in artistic production — or lack thereof. In 1940, the war was going quite badly for the Allies, and many felt the world was at the point of coming to an end . . . just listening to the news today can generate empathy for their despair.” 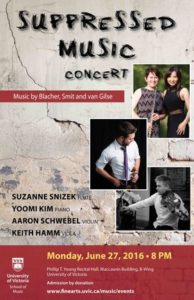 Research aside, she has also been pleased with student response to this body of work. While awareness of history and context differs greatly according to the individual — “I had one student who told me he knew nothing about the Holocaust . . . [as well as] participants in UVic’s I-Witness Holocaust Field School” — Snizek says there has been a great deal of interest in discovering a previously unknown potential repertoire.

Given her international academic and performance background, she also credits the School of Music with nurturing “a healthy, supportive atmosphere” among its students. “The sense of nurturance and the personal attention students receive in our Music department is quite unique. I think we do an exceptionally good job in that area.”

As both a flute performer and music scholar, she says there’s no denying the global impact of a small group of people can make with this kind of work. “There is growing interest in ‘recovering’ these composers, and attitudes have markedly improved even since 2005. People are far more aware now,” she says.

“In the Netherlands, for example, just two musician-researchers managed to recover a large number of excellent musical works and were also successful in disseminating them through recordings, live performances and by making the scores accessible to other musicians. And there are similar centres in Los Angeles and London that have developed strong platforms and networks for promoting these works.”

Snizek has also experienced the emotional impact of her work first-hand. “When I first played through Hans Gál’s Huyton Suite, which had been written during his internment in 1940, it was rather intense,” she admits. “I had closely read his internment diary, met and interviewed his daughter and stayed for a couple of weeks on the Isle of Man where he had been interned . . . so I was coming at this piece of music from a deeply experiential level.”

Learn more about Snizek and her students via her Flute Studio Blog.