When it comes to showcasing the University Art Collections, the pieces on permanent display across campus are really only the tip of the artistic iceberg. There’s the art that rotates through the various exhibits at both downtown’s Legacy Gallery and the McPherson Library’s Maltwood Prints and Drawings Gallery, for instance, but there is also the work done by the acclaimed artists who hold honorary degrees from the university. And while many of these are household names—Jack Shadbolt, E.J. Hughes, Robert Bateman, Mary Pratt—their work isn’t regularly seen around UVic. 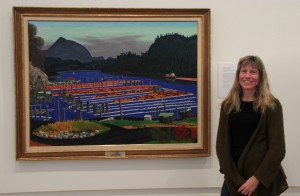 “One of the advantages of an exhibit like this is that it allows us to showcase work from the university collection not usually seen,” says Hughes. “Mfanwy Pavelic‘s painting of Katherine Hepburn, or Ted Grant’s photograph of Pierre Trudeau sliding down a bannister—which isn’t what you’d usually think of as art, but it’s a great example of his photojournalism.”

But while honours have been bestowed on a number of artists—including influential professors like Pat Martin Bates, who helped established UVic’s reputation as a visual arts institution, and Writing department co-founder Robin Skelton—earning an honorary degree is not just a question of contributing to Canadian art, but also to the community at large. 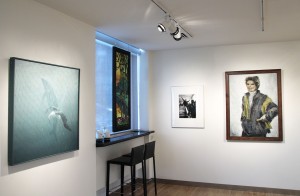 “Robert Bateman is a really good example of that. People love his highly realistic work of wildlife and nature, but he’s also dedicated to the environment and does a lot of work towards that.” To underscore that point, the Bateman on display features an image of a dead porpoise trapped in a gill net. “It’s quite the statement,” says Hughes. (As part of the exhibit, Robert Bateman will give a talk about art and environmentalism at 2pm  Sunday, January 27, at the Legacy.) 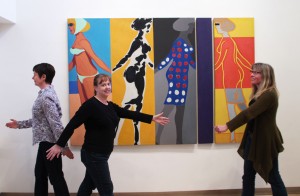 Also on display are works by Carole Sabiston, Robert Davidson, Bill Reid, Ted Harrison, Susan Point, Fenwick Lansdowne, Michael Snow and Fleming Jorgensen, among many others. It’s an impressive list, to be sure, but is there anything Hughes is particularly excited about showing?

“The E.J. Hughes, because he’s one of my favourite B.C. artists,” she says. “It’s a painting of Ladysmith harbour, and is very impressive. It was down in the vault and I hadn’t seen it before, but it’s a really lovely example of his work—he’s not over-stylizing things, it’s just a straightforward approach that reflects his love of Vancouver Island.” 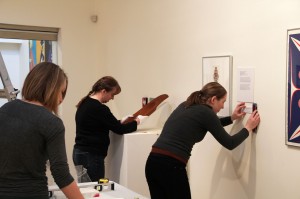 Still relatively new to her position, exhibit curator Hughes credits Legacy colleagues Caroline Riedel and Cindy Vance with helping to familiarize her with the more than 27,000 pieces in the University Art Collections, which are stored in three different locations.

“The whole planning this year was about celebrating UVic,” she explains. “Our first exhibition was about the development of our collection in general, and this one celebrates the tradition of honouring people in our community who do great things.” Better still, says Hughes, about 90 percent of the work is pulled from UVic’s own collection. “Exhibits like this allow us to dip into the collection with a different lens,” she concludes. “Every time you choose a different theme, you pull out different things—it’s like throwing a net in the ocean.”