A lucky handful our School of Music trumpet students had the opportunity to meet iconic American jazz master Wynton Marsalis when he appeared at the Farquhar Auditorium for a concert with the Jazz at Lincoln Center Orchestra on October 15. 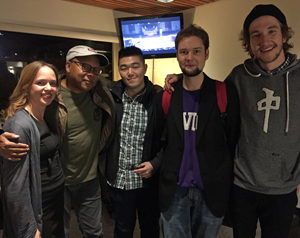 After an open soundcheck where the band rehearsed a new chart freshly composed by one of the orchestra members, Victor Goines—professor of Jazz Studies at Northwestern University and JLCO member since 1993—then fielded questions from the 75+ students that were in attendance. With the help of School of Music trumpet professor Merrie Klazek—who has met Marsalis on previous occasions, and was aware of his generosity for sharing stories and music—several trumpet students later went backstage to chat with the jazz legend.

“Wynton is a very down to earth, genuine person,” says Klazek. “He always has time to chat and sees all people as equal regardless of age or ability. This is what makes him a great teacher.”

She described Marsalis as “gracious and charming” as he ironed his suit and shared detailed stories of how he got into classical music and learned new skills on the trumpet.

The October 15 UVic concert started off with Marsalis playing directly to the students that were sitting in the choir loft. “It was a gesture of absolute grace and generosity,” says Klazek. 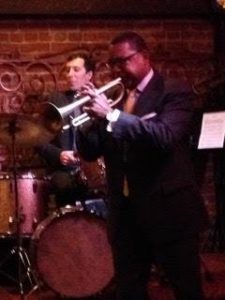 After the concert, Marsalis and fellow JLCO members Walter Blanding, Helen Sung, Carlos Henriquez and Ali Jackson appeared at Hermann’s, Victoria’s jazz club, for a jam session with local musicians—which seems to be standard practice for Marsalis and the JLCO, as they are well-known for their efforts supporting the local jazz scene wherever they play.

Locally, School of Music professor Patrick Boyle was one of the players fortunate enough to jam with Marsalis that night. “We played a little together, just enough so I didn’t get embarrassed,” says Boyle, calling it “a special night to be sure.”

Boyle had also met Marsalis a few times before (“which he insisted he remembered, which if true is kind of amazing”), but this was the first time he had played with him. Repping the Victoria jazz scene that night were the likes of Brad Turner, Sean Drabitt, Roy Styffe, Miguel Valdes, Cynthia Rodriguez Miguelito and Music alumnus Kelby MacNayr. MacNayr will be joining Boyle, Tony Genge and Phil Dwyer for “Deep Into the Groove,” what promises to be an outstanding night of organ jazz at UVic’s Phillip T. Young Recital Hall on January 21.

Boyle and Klazek were both impressed with the student turnout not only at the JLCO soundcheck, pre-concert Q&A with the band and concert, but also at Hermann’s afterwards. “It was an inspiring night all around,”  says Boyle.