Fresh from his Cannes debut, local filmmaker and Department of Writing alum Jeremy Lutter is ready for his next challenge. 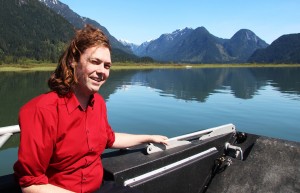 Lutter just finished working the red carpets at the world‐famous Cannes Film Festival, where his short film Joanna Makes a Friend was invited to screen as part of Telefilm Canada’s “Not Short on Talent” program, after winning Viewers’ Choice awards at both Toronto’s TIFF Kids Film Festival and the Victoria Film Festival.

Now he’s ready to make waves with Floodplain, a short film he plans to shoot this summer with Fine Arts digital media staffer and writer/producer Daniel Hogg. Hogg is both a recent nominee in the BC film industry’s Leo Awards (for his short film Woodrow Without Evelyn) and a previous winner (as part of the UVic team who won for the acclaimed Department of Writing web series Freshman’s Wharf).

Based on a short story by Invermere native and fellow Writing alum D.W. Wilson—winner of the BBC National Short Story Award and a BC Book Prize Finalist—Floodplain is a coming of age tale about two high school sweethearts who learn that love demands sacrifice when they fulfill a childhood promise to raft a floodplain in the Kootenay Valley. 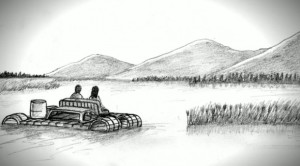 One of Robert Bennett’s storyboards for the Floodplain film project

Using the crowdfunding site Indiegogo.com, Lutter and Hogg are turning to the community to raise $3,500, which will facilitate construction of the hero’s souped‐up raft and to get their cast and crew safely out on the water. You can watch the video, see pictures or get project updates here. If you decide to support the project, you can donate money in exchange for perks, such as original storyboards or a DVD of the finished project.

With their film pitch, Lutter and Hogg were selected for the National Screen Institute Drama Prize, which opens industry doors and provides resources to help make a high-end short film. With that achievement in their back pocket, the two are already attracting Hollywood‐level talent to Floodplain.

Keep track of Floodplain’s progress by following @FloodplainMovie on twitter.com, or by liking their Facebook fan page.